College students who hail from the Eastern Shore of Virginia presented their summer research projects to an audience of family members and donors at the Virginia Institute of Marine Science’s Eastern Shore Laboratory in Wachapreague last week.

The internship program—now in its 7th year—is open to Eastern Shore students, both undergraduates who are home for the summer and students 16 years and older from area high schools. Selection criteria for the internships are highly competitive, with many more students applying than the four to five positions available. 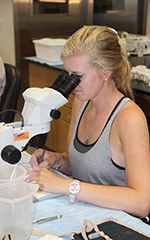 ESL Director Richard Snyder, who joined the VIMS faculty in June, says, “I’m so excited this program exists here on the Eastern Shore, and it’s something that I value greatly. I whole-heartedly thank all of the donors for supporting this program, and the parents for loaning us their young adults for the summer.”

Paige Ross, senior marine scientist at the ESL and program coordinator, says, “This year—as in every year—there’s a lot of work we could not get done without the help of these interns.” With a field staff of about five people, Ross says the addition of five interns helps their field efforts immensely during the summer months.

Ross says the applicant pool for the program is highly competitive. “We select the cream-of-the-crop, but these interns receive other offers as well and they pick to come here. We are proud that we are competitive as well.”

This summer, the students worked on a variety of projects, with no one student working on just a single project. “All of the interns worked on every project,” says Ross. “Whether they were power-washing oyster cages or processing lab samples, they learned how to do a lot of things that offer them a unique skill set. They did an excellent job.”

The ESL internship program is funded entirely by private donations and provides a unique opportunity for local students. With many of its participants focusing on marine-related majors at their respective universities, the program helps them gauge whether a career in marine science is the route they want to take in their future.

Emilee Dize—who returned to the ESL for her third summer as an intern—is a rising senior at JMU majoring in biology. While she took a summer off to pursue other opportunities last year, Dize says she missed this program and was happy to return this year.

“Each summer, I learn more and more about research, marine work, animals, and the environment that we live, swim, and go boating in,” says Dize. “I am very thankful for the opportunity.” 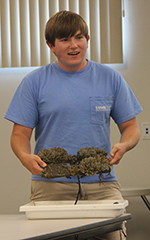 Justin Shaffer, a recent graduate of Broadwater Academy preparing for his freshman year at Virginia Tech, was a first-year intern. Shaffer says he worked on the water the past two summers, but that working at VIMS has been a whole new experience. “While I plan to major in building construction at Tech, this opportunity has been amazing and something I would really like to do again in the future. It was great learning from and working with the VIMS staff and my fellow interns.”

Kelsey Bisker, a Wildlife and Fisheries Biology major at Clemson University, says her favorite part of the internship was being able to do things that she wouldn’t be able to do with any other job on the Eastern Shore. “This summer I had the opportunity to snorkel in the middle of the Bay, go shark fishing, become comfortable using microscopes, help with the growth and deployment of scallops, and catch a shark in an otter net trawl,” she says. “I enjoyed the entire experience very much.”

This was also the first summer as an intern for Parker Kellam, a rising junior biology major at Washington and Lee University, who says, “It’s been fascinating to come home and work at VIMS, especially on the water doing something that I love. I want to thank the donors and the ESL staff for a great summer. I learned more than I ever would have thought. I’m so much more comfortable in the lab, which is something I really wanted to work on since I want to pursue a career in science in the future.”

Like Kellam, Bisker also wants to pursue a career in science. “I hope to be able to work in a marine setting, or even aquaculture,” she says. “If the fisheries part doesn't follow through, then I hope to focus on marine wildlife, such as the conservation of sea turtles or other animals. I just want to work by the ocean or Bay.”

“I am so thankful for the opportunity of having a paid internship that focuses on marine biology so I can come home during my summer breaks,” says Bisker. “I also like how this year was different from last. We had different scenery and we were in the lab more which made me more comfortable working with microscopes.

VIMS’ Eastern Shore Lab is located on a 5-acre site in a facility that affords education and research opportunities not available anywhere else in the region. The lab offers classroom and field opportunities for instructors and students from VIMS; William & Mary; and numerous other colleges and universities in Virginia, other states, and other countries. An important part of the Virginia Institute of Marine Science, the ESL also plays a major role in the Eastern Shore economy.

The ESL also offers a variety of public-education activities throughout the year, in addition to two undergraduate field courses currently offered through VIMS’ School of Marine Science. In addition to working on research projects, the summer interns participate in some of the educational programs offered at the lab during the summer.