High-school and college students from Virginia’s Eastern Shore had the opportunity this summer to pursue marine research close to home at the Virginia Institute of Marine Science’s Eastern Shore Laboratory in Wachapreague.

The interns collaborated on a wide range of projects including restoration of bay scallops, quantifying ecosystem services provided by oyster restoration, investigating interactions between clam aquaculture and the environment, studying stress response and mortality in shark by-catch, and exploring filtration rates of organisms associated with oyster reefs.

Intern Rebecca Turner returned to Wachapreague for her second consecutive year and says that the program is like no other.  “I gained experience that some people can only dream of through fieldwork, lab work, and data collection and analysis,” she says.  “This internship is unique, rewarding, and perfect for anyone interested in the field who doesn’t mind getting their hands a little dirty from time to time.” 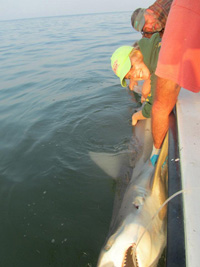 Turner is actively pursuing graduate school options on the East Coast and trying to make an informed decision between the University of North Carolina at Wilmington, the University of Charleston, and of course, the College of William & Mary’s School of Marine Science at VIMS.

The JMU biology major says, “Earning a Master’s degree in marine science has always been my dream, and participating in this internship for the past two summers has helped me fine-tune my interests so I know what I want to study when I get to graduate school.”

Fellow intern Michael Byrd says he also highly recommend the ESL internship. “The program helped me gain knowledge of the current marine projects that are being conducted in my local environment,” says Byrd.  “Being from the Shore and having a special interest in the local marine life made me particularly interested in this internship.”  He says that the hand-on, educational experience gave him a greater interest in attending graduate school.

ESL Director Mark Luckenbach says, “While the interns provide valuable assistance in our research programs, the most important aspect of the program is the educational opportunity that it provides for young people from the Shore with an interest in marine science. Continuing to provide these opportunities for young people from this area is a priority of the program and the primary impetus for the donor support.”

By providing an opportunity to take part in several different research projects, the internship gave the students a better idea of the type of research they hope to pursue in the future. “Getting the chance to play a major role in the study of oyster-reef filtration on this oyster reef project was by far the most exciting part of this internship,” says Turner.  Byrd added, “The scallop restoration project in the South Bay grass beds was definitely the most interesting project for me.”

The internship program, now in its 4th year, is open to college students from the Eastern Shore who are home for the summer and to high school students 16 years of age and older. Selection criteria for the internships are highly competitive, with many more students applying than the four to five positions available. Applications are accepted beginning April 1.

VIMS’ Eastern Shore Lab is located on a 5-acre site in a facility that affords education and research opportunities not available anywhere else in the region.  The lab offers the opportunity for instructors and students from VIMS, William & Mary, numerous other colleges and universities in Virginia, other states and even other countries to use the field station for classes.  An important part of the Virginia Institute of Marine Science, the ESL also plays a major role in the Eastern Shore economy.

The ESL offers a variety of public-education activities throughout the year, in addition to two undergraduate field courses currently offered through VIMS’ School of Marine Science.  In addition to working on research projects, the summer interns participate in some of the educational programs offered at the lab during the summer.