The Colonial Sail & Power Squadron raised more than $5,000 during its fifth annual fundraising event for the Virginia Institute of Marine Science on July 19th.

The event, formerly known as the “Dinghy Poker Run,” has been rebranded as “The Biggest Little Water Festival” and was back and better than ever after undergoing minor changes. As in past years, the event was held at Dare Marina in Yorktown with an overall goal to raise funds to support research efforts at VIMS.

The event featured a five-station “Coastal Run” in which contenders paddled—by way of kayak, stand-up paddle board, or the floatation device of their choice—to designated locations along Chisman Creek where they were quizzed on a variety of boat-related topics. In addition to the on-the-water activities, the event featured water and safety-related exhibits, educational programs, and boating and water-related vendors. 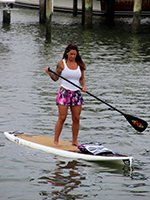 Headquartered in Williamsburg, the Colonial Sail & Power Squadron is a non-profit organization dedicated to promoting safe boating through education. Event organizer Lee Dexter says it’s important to all of the members of the Squadron to hold this annual event for VIMS because of the Institute’s importance to them as boaters.

Our job is to promote and teach boating skills and safety, and VIMS is very important to recreational boaters, not only in our area but all over Chesapeake Bay,” says Dexter. “We’ve been involved with the Institute for years and we love having a chance to support the research programs happening there.”

To participate, adults made a $20 donation to VIMS, while students contributed $10. Raffle tickets were sold in an effort to earn even more money for the Institute. This year’s grand prize was a Mad River Canoe donated by Dexter and his wife, Susan.

Brenda and Michael Bergevin of Smithfield won the grand prize and raffle winners won an assortment of donated prizes including an Apple TV, grill, framed artwork, and an anchor. All proceeds from the event were donated to VIMS from the Squadron. 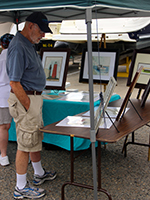 Former event organizer Bill Walsh served as the fundraising coordinator this year and says the event raised the most funds for VIMS to date. “This event gives us all an opportunity to show how much we care about the Bay by getting out there and relaxing in it, while also contributing to an organization that does so much to improve its conditions.”

VIMS Dean and Director John Wells says "We're very grateful to the Colonial Sail & Power Squadron and all the other participants and sponsors for their time and generosity. Support from our community helps us continue to provide the research, education, and advisory service needed to assure a cleaner environment and better future for Chesapeake Bay."