Contrary to popular belief, all work and no play is NOT the scientist's way.  A long day at sea with a tight schedule, which included an interview and two live webinars, has led to a much needed night of relaxation. 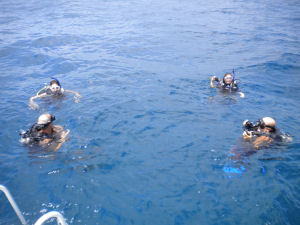 I made it through the habitat entry protocol with very little problems with the help of our Aquarius-based escorts Mark "Otter" Hulsbeck  and Otto Rutten.  After helping Sarina and I strip down our gear and shower off the salt water, Otter and Otto gave us a security briefing and tour of the habitat.   We were told what to do in case of fire or flooding, and more likely on the bottom of the ocean, if the air goes bad. If this occurs, there are a series of BIBS around the habitat that supply good-clean air in case of an emergency.  Our gracious hosts offered us some "Aquanaut" food in the form of high calorie candy, necessary for a long day's work underwater, and we were ready to roll.  With Mark doing some filming from the outside, Sarina interviewed me on video camera from the inside of the habitat about women in science for her Girl Scout Gold Award.  I told a little bit about how I became interested in marine science and about my dissertation project.  After about an hour inside it was time to go, but not before we each made a few quick calls to family to tell them we were calling from the bottom of the ocean.  Unfortunately most of my family was unreachable, but I did manage to have a quick conversation with my dad and husband from 45 feet down in the ocean.  I pulled off a quick tour around the outside of the habitat while Otter shut things down and we were headed back to the surface, just in time to set up for our 2 o'clock webinar on Ustream.

I quickly stripped my gear, rinsed with fresh water and put on a clean shirt for all of your viewing pleasures.  We started our live feed promptly at 0202 EDT, first talking to our boat captain, Tim Roberts, about his involvement in Aquarius. We then moved on to discussing Mark's various Aquanaut adventures.  It got pretty warm on the back of the boat in the southern Florida, August sun; I had to get up and apply sunscreen in the middle of Mark's interview in order to avoid some serious pain tonight.  Then came my big 15 minutes (more like five) of fame, where I was able to talk about marine policy and Aquarius as a tool for getting people excited about science.  It was a little nerve racking being on a live feed and unable to see my viewers or even know exactly what they were seeing or hearing.  It was relieving to call my mom afterwards and have her tell me I did well. Thanks Mom!

A few cannonballs off the back of the boat and we headed back to shore to plan for tonight's live webinar at 1900 EDT.  A load of laundry, a quick nap and a snack of tortellini salad and I was ready for round two.  The seven o'clock show was a nice relaxing chat around a patio table on the dock with a breeze coming up the canal.  So now we're off to Sharkey's, the local watering hole, to briefly celebrate our accomplishments before heading out to the field again tomorrow at 0900.