Yet another great day on the water! 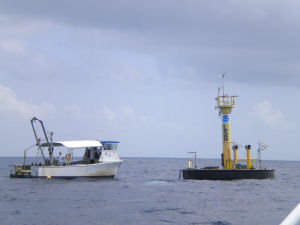 We arrived at the Life Support Buoy (LSB), which floats just above Aquarius, at about 11:45am and I immediately began prepping for our "at sea" webinar. With outstanding wireless signal strength, I conducted a quick test run of the Ustream feed with Vicki Clark, the Virginia Sea Grant Marine Education Coordinator, back in Gloucester Point. I then did some other preparations as Mark, Noelle and Sarina suited up for their dive to Aquarius.

While they were underwater, I had some time to not only prep some notes and cues for the webinar, but also chat with our dayboat Captain, Tim Roberts. What an outstanding guy! His experience and personality make him a pleasure to work with, and without people like him, the science at Aquarius would not get done. It's the behind-the-scenes people that we most often forget or don't even think about, but whom have such a big impact on the success of a project. 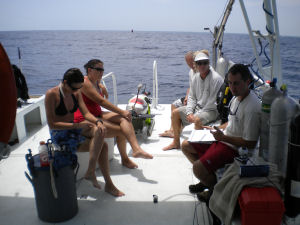 The divers surfaced at about 13:35 and immediately began shedding gear, showering off and changing into their "interview clothes." The first webinar was underway at 14:02 EDT. Though I was pretty nervous about the whole thing (could you tell?), I think it went off pretty well, and while about 50 computers were logged on (hopefully each computer had multiple people in front of it), at the time of writing this, the archived version has had 35 views, which is great news!

We wrapped up the webinar around 14:30, shut down the computer as they shut down the LSB, which provides not only power and communications to the habitat, but also the at-sea wireless signal. We packed up, stowed gear and headed for Land Base.

Back on land, we changed out dive tanks, rinsed gear and prepped for the second webinar. The roughly 4 hours of prep time included a trip to Radio Shack and about two hours of wrestling with Mark's Mac to figure out how we could show video of Sarina and Noelle's interview during the webinar. As stress levels peaked at about 18:45, just 15 minutes prior to webinar start, Mark finally cracked the code and we briskly moved to our dockside "studio."

The second webinar, though less attended, featured some great audience interaction (thanks Terri!), a cool Key Largo canal breeze and look at the newest model of Fetch-class AUVs, Fetch3.

Once we finished the second webinar, we cleaned up and decompressed at Sharkey's, a local restaurant where we enjoyed a great dinner, great company, great conversation and a little preseason football!

Now that the webinars are over, we're back to focusing on the mission at hand. Thanks to all those that tuned in, and for those that missed either, or both, of the webinars, you can see archived versions at: http://www.ustream.tv/channel/conchreef2009 and please, after you have watched them, please fill out this brief survey to let us know how we did. We appreciate your participation and feedback!

Talk to you tomorrow!