Hurricane Isabel slammed into the VIMS campus on September 18, 2003 during its passage across North Carolina and Virginia. Isabel’s storm-surge and waves combined to destroy all three of VIMS’ research piers, including the pump houses and lines that supply running seawater to Institute scientists. Waves, storm-surge flooding, and fallen trees also claimed 18,000 square feet of workspace and displaced 34 scientific and support personnel. Several buildings on campus were without electricity for more than a week.

Director of Facilities Management Joe Martinez estimates that damages to the campus reached $2-3 million, the highest loss in state government.

"We had moved most of our gear to higher ground or secured it to the pier because we expected flooding,” says Seitz, “but we never expected to lose the entire building.” The loss of the Ferry House was particularly surprising because it had withstood the great “Storm King” hurricane of 1933, Tropical Storm Agnes in 1972, and several other hurricanes or tropical storms since the 1920s. Rising sea level is at least partly to blame, as  described by VIMS emeritus professor John Boon in his "The Three Faces of Isabel."

Dr. Emmett Duffy’s food-web research also suffered from the destruction of the piers. Isabel’s storm surge carried off 11 large fiberglass tanks and 30 medium-sized ones, along with their associated plumbing and filtration systems. Duffy and his graduate students had been using the tanks to explore the working of food webs involving seagrass-dwelling invertebrates. To date, only one of the large tanks has been retrieved, from Queen’s Creek upriver of VIMS. 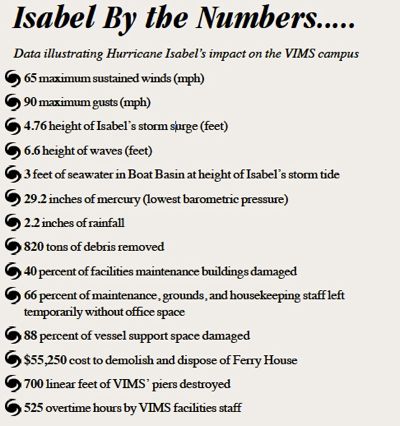 Duffy says that it is hard at this stage to say how loss of the tanks will affect his research. “If everything is rebuilt in a timely way by April or May when our research resumes after winter, we should be OK, although we’ll have to expend considerable time and effort to reconfigure the system. If we lose the spring it will be a significant setback.” Plans are to relocate the tanks to the shoreline between Byrd Hall and the VIMS Maintenance Complex, both to protect them from future storms and maximize researcher safety.

“The damages to the facility’s physical structure can be repaired,” says Oesterling, “but the same can not be said of the lost research animals.” Particularly detrimental was release of several 2-year old cobia weighing roughly 30 pounds each, which had been raised from eggs and were to be used as brood stock in 2004. Oesterling also had to release several hundred small cobia that were to be used in tagging research for stock enhancement. The closure of the marine finfish culture facility also postponed continuing aquaculture research on cultured spot until fall 2004.