An idea that germinated along Virginia’s Eastern Shore has now sent offshoots across the Atlantic, drawing a team of European entrepreneurs and scientists who hope to bring lessons learned from seagrass restoration in Virginia’s seaside bays to the coastal waters of Scandinavia.

Restoration of underwater grasses to Virginia’s coastal bays is the brainchild of Dr. Robert “JJ” Orth, a Virginia Institute of Marine Science professor who first began sowing the bays' shallow waters with eelgrass seeds in 1999. Barren at the time, the bays are now home to 4,700 acres of lush eelgrass meadow, making them the largest and most successful example of seagrass restoration in the world. In fact, 75% of the world’s restored seagrass beds now reside in these seaside bays.

Last week a trio of researchers from Denmark and Sweden visited one of the restoration sites—South Bay—to gain first-hand knowledge of how they can translate the strategies painstakingly developed by Orth and colleagues to even larger scale restoration efforts along the shallow costal bays of Denmark’s Jutland peninsula. As in Virginia and other areas around the world, seagrasses in Danish waters have suffered drastic declines during the last several decades due to nutrient pollution, disease, and other factors. 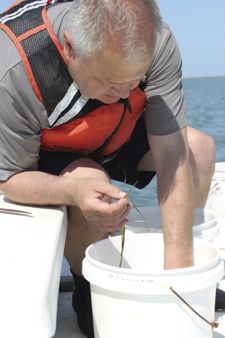 Leo Mosgaard Nielsen, manager of the Danish consulting firm Multidyk, says he was excited to see South Bay’s restored eelgrass meadows in person, after having read about the team’s success and methods. He was joined on his U.S. visit by Per Nyström, director of the Swedish firm NyFam AB, and by Dr. Eduardo Infantes, a Spanish post-doctoral research associate in the lab of Professor Per-Olav Moksnes at the University of Gothenburg, Sweden. The trio’s visit was part of NOVAGRASS, a collaborative international effort funded by the Danish government to refine and scale-up methods for seagrass restoration.

The restoration approach currently used by Orth’s team incorporates enhancements developed during almost 15 years of field and laboratory tests. They’ve discovered how to more effectively acquire and process seeds, how to better maintain the seeds’ viability during storage, and are now working to increase the percentage of seeds that successfully grow into seedlings.

“Early attempts at seagrass restoration mainly involved transplanting of shoots from adult plants,” says Orth. “Our work has shown that using seeds is equally effective and requires less effort, though there is still plenty of effort involved.”

The team now uses a self-designed mechanical harvester constructed by staff member Scott Marion to cut the reproductive shoots, during a brief period in the spring when the seeds have developed but not yet dropped from the plant. They store the shoots in large aerated tanks until mid-July, allowing the seeds to ripen, then separate the viable seeds from unviable seeds and shoots. The researchers store the viable seeds in an indoor recirculating seawater tank until the fall, when they broadcast them by hand into areas they’ve identified as suitable for eelgrass growth.

To date, the team has broadcast more than 50 million seeds across 380 acres along Virginia’s Eastern Shore. As of 2012, eelgrass from these seeded areas has spread naturally to carpet about 7.3 square miles of South, Cobb, and Hog Island bays.

The need for restoration

As the term “restoration” implies, widespread eelgrass coverage in Virginia’s seaside bays is nothing new—these areas supported verdant eelgrass meadows up until the 1930s. Likewise, the coastal waters of Denmark once nurtured more than 2,500 square miles of eelgrass meadows, about 15% of the country’s coastal area.

The real question, then, is why the eelgrasses in these areas require human intervention to recover, rather than doing so naturally. In some areas, the initial loss of seagrass is thought to open the bottom to erosion by waves and currents. This clouds the water—blocking the sunlight that seagrasses need to grow—and can also dislodge seedlings from the bottom.

In Virginia’s coastal bays the story is different. When Orth’s team added seeds from York River eelgrass to the clear waters of this largely rural area, they quickly took hold—suggesting that natural recovery was due to a simple lack of seeds. Looking at the eelgrass beds that now nearly fill South Bay, Orth says “It’s phenomenal how fast seeded areas can spread when there’s good water quality.”

Eelgrass recovery in Danish waters appears to be hindered by the area’s own unique set of factors, including wave action, entanglement by drifting seaweed, disruption by a burrowing marine worm, and a reduction in the anchoring capacity of sediments. But the nation’s recent success in reducing nutrient inputs to its coastal waters offers the promise of better things to come.

“After seeing the success JJ and his colleagues have had here with seeding,” says Mosgaard Nielsen, “we think we can adapt their methods to large-scale eelgrass restoration projects in Denmark and other areas nearby.” 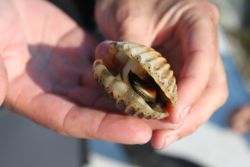 Restoration of eelgrass meadows promises numerous environmental and economic benefits, both at home and abroad. In Virginia, eelgrass provides nursery habitat for many recreationally and commercially important species, including blue crabs, striped bass, and bay scallops. Indeed, Virginia’s seaside bays supported a vibrant bay scallop fishery until the loss of eelgrass in the 1930s; Orth and VIMS colleague Dr. Mark Luckenbach are leading a parallel project to re-establish the scallop resource by introducing juvenile bay scallops to the restored meadows. They have added several hundred thousand bay scallops to date, and plan to add significantly more during the next few years.

In Denmark, eelgrass beds likewise provide nursery and feeding habitat for local species, and play an important role in removing excess carbon and nitrogen from the water—an “ecosystem service” that the NOVAGRASS scientists estimate is worth more than $11 million per year in Denmark’s Odense Fjord alone.

Different members of the NOVAGRASS team will visit VIMS in July and September to observe the next steps in the seed project, and to discuss management issues related to providing the water quality needed for eelgrass recovery.

VIMS'  15-year effort to restore eelgrass to the seaside bays has been funded by grants from numerous agencies, notably the Coastal Programs of the Virginia Department of Environmental Quality (administered by NOAA’s Office of Ocean and Coastal Resource Management), the Virginia Recreational Fishing License Fund, the American Recovery and Reinvestment Act, The Nature Conservancy, the U.S. Army Corps of Engineers, the Virginia Department of Transportation, and private grants from the Allied-Signal Foundation, Norfolk-Southern, and the Keith Campbell Foundation for the Environment.