McDonnell appointed Hershner to the Statewide Advisory Board for the Virginia Water Resources Research Center. Hershner, director of the Center for Coastal Resources Management at VIMS, has extensive research and policy experience related to the types of land-use and watershed issues that the Water Center was designed to address.

The Water Center—established in 1964 by Congress as part a network of 54 water resource programs at land-grant universities across the nation—supports interdisciplinary water research and educational projects; acts as an information resource regarding the Commonwealth’s freshwater resources; and transfers research results and new technology to potential users.

Also appointed to the Water Center advisory board were Joe Lerch, Director of Environmental Policy for the Virginia Municipal League; and Joseph Tannery, Environmental Consultant for Dominion Resources. 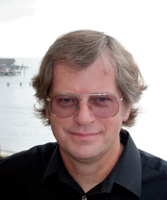 McDonnell appointed VIMS professor Roger Mann to the Aquaculture Advisory Board, a division of the Commonwealth’s Department of Agriculture and Consumer Services. Mann, Director of Research and Advisory Service at VIMS and head of the Institute’s Molluscan Ecology Program, has significant experience in research and restoration efforts for oysters and hard clams, two centerpieces of the Commonwealth’s growing aquaculture industry.

The Aquaculture Advisory Board was created by action of the 1992 General Assembly for the purpose of advising the commissioner of Agriculture and Consumer Services on matters relating to aquaculture. The seven-member board is appointed by the governor to represent the interest of the state's aquaculture industry.

Also appointed to the Board were Robert Bloxom, Jr., owner of Egret Point Seafood, and A.J. Erskine, Aquaculture Manager and Field Scientist for Bevans Oyster Company and Coward Seafood Corporation. Erskine received his Master’s Degree from the College of William and Mary’s School of Marine Science at VIMS in 2003.