Despite the stagnant economy, Virginia’s oyster aquaculture industry is on an upward track, and oyster hatcheries plan to keep that trend positive.

That’s why representatives from nearly all of the oyster hatcheries in Virginia set aside an entire day on October 25 to hear West Coast counterparts and research experts discuss one more threat to water quality—ocean acidification.

The Ocean Acidification Workshop was the result of an initiative of the Sustainable Fisheries Partnership (SFP) to bring the lessons learned about changing ocean chemistry from the Pacific Coast shellfish industry to hatcheries on the East Coast. These lessons include the need to monitor for signs of ocean acidification and manage hatchery activities around those findings; lessons that the businesses in Oregon and Washington learned only after they were surprised by acidification and suffered devastating losses.

“Understanding changes in water chemistry is important to the bottom line,” said Karen Hudson, Virginia Sea Grant Shellfish Aquaculture Specialist at the Virginia Institute of Marine Science, who partnered with SFP to organize the event. In Virginia, the bottom line is that oyster aquaculture is a multimillion-dollar industry that relies on local hatcheries to spawn and provide young oysters for planting.

When an oyster is born, it doesn’t have a hard shell. Rather, it is a free-swimming speck of an animal that is very sensitive to its watery environment. In this stage, water quality affects larval growth and development, and some of these effects can impact the animal for its entire life. Water quality at the hatchery could be the difference between a normal, healthy oyster and an unmarketable or dead one. 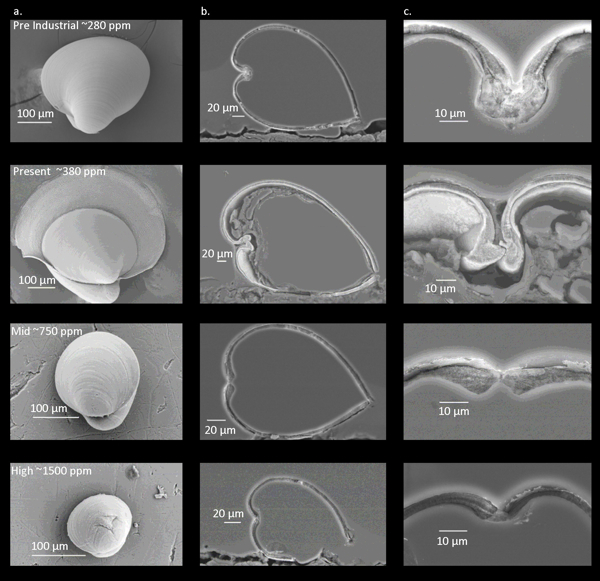 The availability of the molecule that oysters use to build their shells is the key concern for hatcheries. Ocean acidification occurs as ocean water increasingly absorbs carbon dioxide from the atmosphere. This dissolved carbon dioxide makes waters more acidic and actually reduces availability of the specific compound—calcium carbonate—that oysters use to build their shells. Low levels of calcium carbonate makes it difficult or even impossible for an oyster to lay down the first shell that it needs to transition from a free-swimming larva into a fingernail-sized seed oyster, which hatcheries can sell and oyster growers can plant.

Ocean acidification snuck up on West Coast hatcheries, and the results were devastating. In 2005, some hatcheries produced no viable oysters during the growing season. It wasn’t until 2010, when hatcheries started measuring for acidification and planning activities around preferable water quality conditions, that production levels were partially restored.

After hearing how West Coast hatcheries were caught off guard by ocean acidification, representatives of Virginia’s hatcheries seemed ready to take a proactive approach by adding high-precision measurements of acidity and other measures of water quality to their already existing monitoring efforts.

Although ocean acidification is driven by worldwide increases in atmospheric carbon dioxide, local factors could play a role in influencing the affects of acidification in an area. Without knowing more about those local factors, it’s difficult to say whether Atlantic states will suffer a similar fate to those along the Pacific. However, there is evidence that ocean acidification is occurring in places along the East Coast. In Maine, researchers found muds so acidic they corrode shellfish larvae. Laboratory experiments suggested that estuaries could be vulnerable to the expected changes in water chemistry as atmospheric carbon dioxide increases in the future.

Virginia’s hatcheries hope that by staying in front of the issue, they can continue to provide needed oyster seed to Virginia’s rapidly growing oyster aquaculture industry. According to the Virginia Sea Grant Marine Extension Program’s 2010 “Virginia Shellfish Aquaculture Situation and outlook Report,” oyster growers sold more than 16 million oysters worth more than $5 million. That same year, growers planted nearly 80 million seed oysters, three times more than ever before, poising oyster sales to dramatically increase in a few years when those oysters mature.