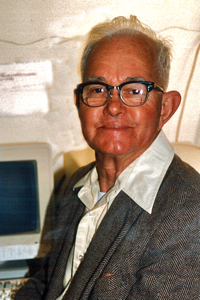 Professor emeritus Dexter Haven of the Virginia Institute of Marine Science passed away on Saturday, March 12, 2011. He was 92.

Professor Haven retired from VIMS in 1984 after 34 years of service. He arrived at VIMS (then the Virginia Fisheries Laboratory) in 1949 after earning his Bachelor and Master’s of Science degrees from Rhode Island State College. He served in the U.S. Army Air Corps from 1942-1946, followed by a one-year stint with U.S. Fish and Wildlife Service studying the New England flounder fishery.

Fellow emeritus professor Maurice “Mo” Lynch says that Haven was a “pioneer in several different areas of marine science in Chesapeake Bay,” including "seminal early studies of oysters and clams.”

“Dexter was one of our most productive scientists,” says Lynch, “and always ready to set aside his own research programs when the General Assembly expressed a need for advisory service related to the Commonwealth’s marine resources.”

VIMS emeritus professor Herb Austin adds that “Dexter was one of the hardest-working people I’ve ever met, and also one of the most honest. He was just such an ethical man.”

Professor Roger Mann, Director of Research and Advisory Service at VIMS, echoes those sentiments: "Dexter was a gentleman," says Mann, "and a colleague in the finest sense of the word." Mann now manages the oyster survey that professor Haven established at VIMS in the 1950s.

An electronic search of the holdings of the Hargis Library at VIMS shows that Haven authored or co-authored 151 advisory reports and journal articles during his career, including numerous “Special Reports in Marine Science and Engineering" and "Special Papers in Marine Science."  These “SRAMSOE” and "Special Paper" reports are a primary means by which VIMS researchers provide advisory service to the General Assembly and citizens of the Commonwealth.

Austin considers a 1978 Special Paper on “The oyster industry of Virginia: its status, problems, and promise” as Haven’s most significant single accomplishment. Austin says the report is still “the most definitive thing that’s ever been written on oyster problems and productivity in Chesapeake Bay.”

“Members of the General Assembly were very taken by that piece of work,” says Austin. “The Chair of one of the Senate committees at the time said ‘the gauntlet has been thrown,’” making reference to the difficult recommendations made in what the VIMS authors referred to simply as “The White Paper."

Austin says it was Haven’s report that led the General Assembly’s Chesapeake and Tributaries Subcommittee to develop oyster recommendations that were enacted in 1984. These regulations, together with the federal Chesapeake Bay Act of 1983 (which was also informed by the VIMS report) have guided the difficult challenge of Bay restoration and recovery ever since.

Austin says that one of the most telling aspects of this often contentious process was that the watermen who were most affected by the state and federal regulations continued to have great respect for professor Haven, even though they might disagree with the specific recommendations in his report.

“There were public hearings all over the state, and Dexter went to all of them,” says Austin. “On one occasion, a waterman got up in front of members of VMRC (Virginia Marine Resources Commission) and the General Assembly, and said ‘I don’t like the things Dexter Haven says, because it’s going to hurt my pocket book, but I know Dexter has my best interests in mind, and is doing what he thinks is right. I believe that his data are good, and in what he’s trying to do, even though I think it’s going to hurt me in the short term.”

“I was really taken with the fact that a waterman would say that in public,“ says Austin. 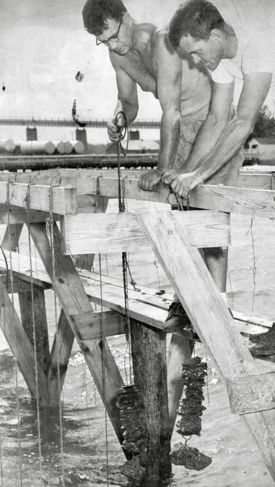 Another of Haven’s signature accomplishments was a re-mapping of Virginia’s public oyster grounds, known as “Baylor Grounds” after their original surveyor, Lt. James Bowen Baylor. Lynch says Haven’s effort was the “last thorough survey” of this valuable natural resource, the heart of Virginia’s oyster fishery since the 1890s. The Baylor Survey is still in use, and plays a significant role in the continuing effort to restore Virginia’s beleaguered oyster industry.

Haven was also instrumental in establishing the VIMS oyster spat-fall survey, which records the number of juvenile oysters, or spat, that survive their larval stage to settle on the bay floor as the next generation of oysters. The program, still in operation today, reveals long-term trends in “recruitment” of oysters to lower Chesapeake Bay and helps resource managers assess the state of the current oyster resource and the Bay’s general health. The data also help watermen and resource managers best know when and where to plant shell.

“This kind of monitoring work is rarely seen as exciting,” says Austin. “It’s not until you begin to look at many years of data that you realize its true value. Some of the best publications and dissertations from VIMS have come from researchers and students who looked at data from our long-term monitoring programs.”

Haven was recognized with many awards during his long and fruitful career, including receipt of the National Shellfisheries Association’s David H. Wallace Award in 1985 for contributions to shellfish science. He served as president of the Association from 1975-1976 and was elected as an Honored Life Member in 1993. He was also an early recipient of the "Venerable Clam" award from the Atlantic Estuarine Research Society, in recognition of his character, attainments, and long-standing contributions to the field of estuarine science.