New discoveries in “marine forensics” by researchers at the Virginia Institute of Marine Science will allow federal seafood agents to genetically test blue marlin to quickly and accurately determine their ocean of origin.

The test is needed to ensure that the blue marlin sold in U.S. seafood markets were not taken from the Atlantic Ocean. The import and sale of blue marlin from the Pacific or Indian oceans is legal in the U.S., while the marketing of Atlantic blues can bring civil or criminal penalties, including fines, seizure of a catch, or the loss of a fishing permit. Regulation of Atlantic blue marlin reflects overfishing and a troubling drop in population within Atlantic waters. 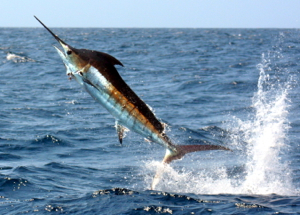 Blue marlin—magnificent billfish that can grow to 13 feet long and weigh up to 2,000 pounds—are frequently taken as by-catch in tuna and swordfish fisheries, and are also targeted by recreational anglers. Marlin is sold in restaurants, and at stands in the Caribbean as BBQ fish-on-a-stick or as filling for fish fritters.

Sorenson completed the work as part of her Master’s research in the College of William and Mary’s School of Marine Science at VIMS, with Graves and McDowell as her co-advisors.

Graves, who chairs the U.S. Advisory Committee to the International Commission for the Conservation of Atlantic Tunas (ICCAT), says “Blue marlin from the Atlantic can be illegally marketed as originating from the Indo-Pacific stock, which is currently unregulated. Laurie and Jan identified 10 new microsatellite markers that enforcement agencies can use to readily discriminate between Indo-Pacific and Atlantic fish.”

Genetic tests to determine the origin of blue marlin and other marine species are conducted by the Marine Forensics Program within NOAA’s Center for Coastal Environmental Health and Biomolecular Research in Charleston, South Carolina. The Center is part of the National Ocean Service’s National Centers for Coastal Ocean Science.

Trey Knott, a forensic biologist responsible for testing blue marlin at the Charleston lab, says “our relationship with the researchers at VIMS has been invaluable. We wouldn’t have been able to tackle an R&D project like this given the casework load in our lab, and the folks at VIMS bring a wealth of historical experience and knowledge of billfish.”

Knott is scheduled to visit VIMS this winter to be introduced to the new method. He will then transfer the testing procedure to the Charleston Lab, where he plans to put it into operational use later next year.

According to NOAA's Office of Law Enforcement, illegal marketing of Atlantic blue marlin is known to occur when fish landed in the recreational fishery are sold at the dock to markets or individuals as Pacific-caught fish.

Jeff Radonski, Acting Deputy Special Agent in charge of NOAA’s Office of Law Enforcement’s Southeast Division, says, “Domestically, commercial fishing operations generally aren’t a problem. But a black market does exist that may be supplied with recreationally harvested billfish. In some places, recreational anglers opportunistically target Atlantic marlin and sailfish for sale as a means to cover their expenses. The potential issue is locally harvested marlin being comingled with legally imported marlin through fraudulent Certificates of Eligibility or invoices.” 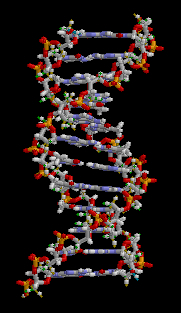 The new test uses “microsatellite markers”—repeating sequences of genetic material along the strands of DNA that lie within an organism’s cells. Closely related individuals—such as those within either the Atlantic or Indo-Pacific stock—tend to share similar patterns of repetition, thus providing a “genetic fingerprint” for identification.

“These new markers amplify well using samples from Atlantic and Pacific blue marlin,” says Sorenson. “That means that they have value and utility in studies of both stocks. Use of these markers will provide a more powerful means of identifying the ocean of origin, allowing enforcement of regulations for this species.”

The team identified the new markers by examining blue marlin heart tissue, and tested their effectiveness by analyzing tissues from 40 blue marlin—20 from mid-Pacific waters near Hawai’i, and 20 from the coast of Ghana in the equatorial eastern Atlantic. They isolated the microsatellite markers using PCR (polymerase chain reaction) and other techniques common to the geneticists’ toolbox.

“The new test provides more power to discriminate Atlantic and Indo-Pacific blue marlin,” says Sorenson. “It uses a suite of markers to identify a sample’s ocean of origin with enough accuracy to be able to enforce the prohibition on the sale of Atlantic blue marlin.”

Current genetic markers for blue marlin—also developed at VIMS—are only partly effective. “Our earlier research showed that about 40% of Atlantic blue marlin have mitochondrial gene fragments that are unique to the Atlantic stock,” says McDowell. "We used that fact to develop an assay to quickly determine if a sample was in that 40%, so that we could unambiguously say it was of Atlantic origin. But that left a large percentage of samples whose origin remained unknown and unknowable.”

The VIMS research team has also generated a reference database—a collection of genotypes for the Atlantic and Pacific stocks—that totals 344 individuals. They are currently working to publish these results, which include statistical analyses (assignment tests) to determine ocean of origin.