The rain that has plagued the U.S. East Coast for the last few weeks has caused serious flooding throughout the Chesapeake Bay watershed and carried huge amounts of debris into the Bay’s upper reaches. Runoff from the rain has also noticeably lowered Bay salinity, with impacts to both the Bay ecosystem and marine research. 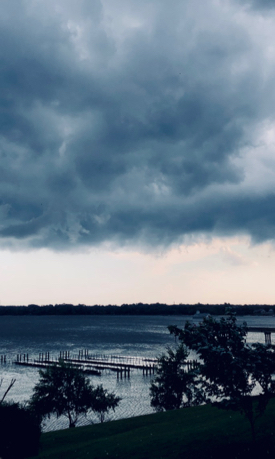 Just how wet has it been? Since July 21st, 6 to 10 inches of rain has fallen across most of Virginia, with 10-15 inches across much of Maryland and Pennsylvania—and this follows a very wet May in the mid-Atlantic. All this rain has saturated watershed soils—thus promoting surface runoff rather than groundwater recharge—and pushed the freshwater plumes of Bay tributaries further toward the mainstem.

The result? Whereas mid-summer salinity near the mouth of the York River and other lower Bay tributaries typically hovers around 20 parts per thousand, 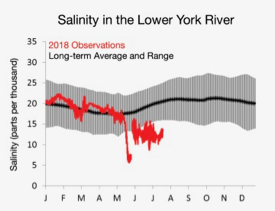 recent measurements show values as low as 10 ppt—only half as salty. Full seawater averages around 35 ppt.

Researchers at the Virginia Institute of Marine Science have observed both positive and negative effects from the reduced salinity and storminess, with impacts on everything from algal blooms to fish distributions, oyster mortality and disease prevalence, the conduct of in-lab experiments, and the incidence of low-oxygen dead zones.

To HAB or not to HAB

One of the most significant impacts of the reduced salinity is the near absence of the potentially harmful algal species that typically begin to bloom at this time of year in lower Bay waters. Their scarcity has affected research by a number of VIMS scientists, including professors Iris Anderson, Mark Brush, and Kim Reece.

Reece says “There’s no sign yet of our typical late summer blooms of Margalefidinium polykrikoides or Alexandrium monilatum. This is good news for local shellfish growers, but not great for our field experiments, in which we’re aiming to study the impacts of these bloom species on oysters.” The experiments—funded by ECOHAB and Aquaculture grants from NOAA and a Virginia Sea Grant Fellowship to graduate student Clara Robison—were timed to coincide with the regular appearance of M. polykrikoides in the lower Bay in late July and of A. monilatum in August.

The dearth of these bloom species is also hindering a project funded by the National Science Foundation. “We have an NSF grant to investigate how phytoplankton blooms affect the carbon cycle, water chemistry in the York River, and microbial communities,” says Anderson. “Alas, we’ve so far seen no HAB blooms, which apparently are salinity dependent. It’s really messing up our research.”

Brush, a collaborator on both the ECOHAB and NSF grants, says the absence of the blooms is most likely due to “a combination of the low salinity, low light during the rainy days, and increased flushing of the York River.” The reduced salinity and light hinder algal growth, while increased flushing removes the algae faster than they can reproduce.

The rain-induced drop in Bay salinity has also affected fishes, as clearly observed in early results from the Juvenile Striped Bass Seine Survey at VIMS.

“Fish sampling on the seine survey has certainly been impacted by the low salinities this summer,” says survey manager Brian Gallagher. “Though overall abundance doesn’t appear to be affected, juvenile striped bass are spread out over a much wider area than usual. They are typically concentrated in mid-river locations, but we have seen unusually high numbers at downriver stations, 10-20 miles from the mouth of each river.” Gallagher attributes the shift to a downstream incursion of the fresher waters the juvenile stripers prefer.

Gallagher says that crew members have also “captured several freshwater fishes that have been historically rare on the Seine Survey, such as warmouth sunfish, white crappie, and black crappie.”

The reduced salinity has also added a challenge to experiments within VIMS’ Seawater Research Laboratory, which pumps water directly from the York River. Describing work by herself and REU student Teresa Lin of New York University, VIMS graduate student Kathy Longmire says “Our research projects with blue crabs and hard-shell clams have definitely been affected by the incredibly low salinity this summer. Both of us are using a ton of Instant Ocean® to increase salinity to its typical level, and have had to closely monitor salinity in all our tanks to ensure our organisms aren't stressed when being transferred from one tank to another.”

The good, the bad, and the oyster

Dr. Ryan Carnegie, a research associate professor at VIMS, says the low salinity is also impacting the Bay’s oysters, both for good and ill. “MSX disease may largely be purged from Chesapeake Bay oyster populations as the parasite Haplosporidium nelsoni cannot withstand salinities below 10,” he says. 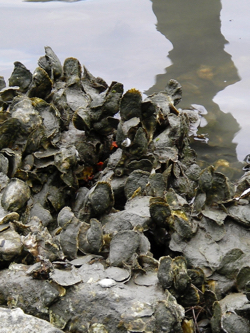 “But because of these low salinities large numbers of oysters in upriver beds in places like the James River have died.”

Carnegie adds that “effects on younger life stages and over broader regions of the Bay may only be clear later this season, after Roger Mann and Missy Southworth have completed their annual Molluscan Ecology Monitoring Program work. But they could be significant. We had very low salinities in 2003, which also killed a lot of upriver oysters and produced very low spatfall numbers, suggesting significant environmental effects on oyster larvae and newly settled spat.”

Carnegie cautions that recent impacts to oysters and other Bay organisms could stem not only from low salinities, but from other factors associated with stormy weather such as an influx of sediments and contaminants. “Estuaries are inherently variable environments,” he says, “but extreme events can be beyond what many inhabitants can manage. The 1972 Agnes event is a classic illustration. We will just have to wait and see how detrimental this year’s event was on key resource species.”

The Bay is alive, with the lack of dead zones

Low-oxygen “dead zones”—or the lack thereof—provide another case where storminess rather than low salinity may have played the major role in recent events.

Marjy Friedrichs, the research associate professor who pioneered VIMS’ real-time dead zone forecasts, says “One might think that the reduction in surface salinity could increase stratification, and hence increase hypoxia. But the storminess that has accompanied the precipitation has actually caused increased mixing and reduced hypoxia. I think it’s fascinating how the stormy weather has almost completely gotten rid of the July hypoxia this year. We’re seeing some very unusual hypoxia distributions!”