In January of last year, a series of epic snowstorms struck Alaska’s panhandle, leaving up to 18 feet of snow in many areas. That’s six times more snow than fell during the blizzard that paralyzed New England in early February.

Professor Steve Kuehl of the Virginia Institute of Marine Science, College of William & Mary, is now awaiting word on a proposal to further investigate whether river runoff from this so-called "Snowpocalypse" left a signature in nearby seafloor sediments, and if so, what the long-term record of such events might say about the area's fast-changing climate.

“We talk about climate change and extreme weather events,” says Kuehl, “but what happened in this case was over the top, even for an area of Alaska that’s used to heavy snows. They had to call out the National Guard to get people out of their houses in Cordova—it was extraordinary.”

“The Copper River discharges about 70 million tons of sediment to the ocean every year,” says Kuehl. “That’s almost 20 percent as much as the Mississippi, even though the Mississippi’s drainage basin is 50 times larger.” Local currents carry much of the Copper’s heavy sediment load into nearby Prince William Sound, where earlier work by Milliman and other researchers reveals the accumulation of an astounding 450 feet of sediment during the last 10,000 years.

As its name implies, NSF’s Rapid Response program provides an opportunity for scientists to quickly compete for the funds needed to investigate the causes and impacts of ephemeral events such as storms, earthquakes, and tsunamis—condensing a proposal process that typically take months into a few weeks. 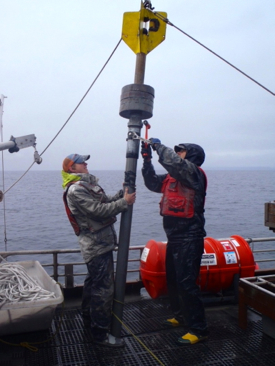 “We successfully submitted a Rapid Response proposal in spring 2012 and used the funds to look at the hydrology of the river during last year’s spring melt,” says Kuehl. “We first wanted to see what effects the melting of the heavy snowpack would have on the coastal ocean— to characterize the river’s plume. We also wanted to collect sediment cores to see if we could identify proxies for Copper River discharge that we might eventually be able to tie back to long-term climate patterns.”

Kuehl notes that last year’s unprecedented snowfall in southeastern Alaska—twice that previously measured for December through February since records began in 1950—was related to the northerly position of the jet stream and a stationary Aleutian low-pressure system. These factors also contributed to record winter warmth throughout the lower 48 states, and have been cited as a harbinger of present and future climate change.

“Climate drivers such as the Arctic Oscillation, Pacific Decadal Oscillation, and El Niño Southern Oscillation have likely influenced the past positions of the Aleutian Low, and hence year-to-year variations in Copper River discharge,” says Kuehl. “Understanding the relative importance of last year’s event in the context of past changes driven by these climatic oscillations will require the development of paleo-proxies of Copper River discharge, which our early results suggest are preserved in the rapidly accumulating sediments of Prince William Sound.”

A proxy is a chemical or physical attribute—like the width of a tree ring—that can be used to track changes in some other environmental variable—like precipitation—on a periodic, often annual, basis. Retrieved by coring into sediments, ice, corals, or other materials, paleo-proxies extend knowledge of environmental changes back through geologic time.

Kuehl says that areas where sediments accumulate rapidly, like Prince William Sound, are favored for proxy studies because they’re more likely to hold a detailed record of past changes. “It’s like the difference between an image taken by a cell phone versus a high-end camera,” he explains. “The higher the data or sedimentation rate, the clearer the picture.”

Developing a paleo-proxy requires dating the sediments in a core, which Kuehl’s team did using various naturally occurring radioisotopes such as Pb-210, which has a half-life of 22.3 years. “We analyzed lead-210 activity with depth in a 5-foot core taken near the mouth of Prince William Sound,” says Kuehl, “and came up with an accumulation rate of about 6 centimeters per year, which is pretty phenomenal.”

Even more exciting was their discovery of distinct layers in the core, which they suspect may signal the annual spring melt. “If there’s a place where we can develop a high-resolution proxy for Copper River discharge,” says Kuehl, “I think we have an opportunity here.” 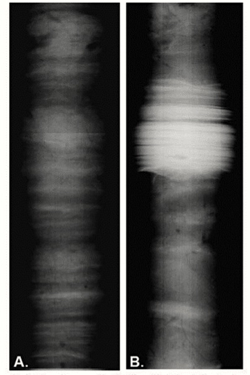 The team analyzed their cores using a cutting-edge technique called X-ray fluorescence. “The beautiful thing about XRF,” says Kuehl, “is that you get a read-out of age and elemental concentrations all at once, and at very high resolution down the core. The elemental composition is tied back to the geology of the surrounding basins, with significant differences between the Copper River watershed and the area to the north. We hope we can take advantage of those differences to identify the annual signal of Copper River runoff into Prince William Sound.”

“Our initial thought,” says Kuehl, “was that the sediments of Prince William Sound might record the history of Copper River discharge and how it might be influenced by climate. But now we think those sediments may also contain an unparalleled seismic record extending back 10,000 years. We’re hoping to get back up to Alaska as early as this summer to take longer cores for additional analyses.”