It might seem like common sense that a 1-foot rise in sea level, as predicted for the mid-Atlantic by 2040, would flood everything less than 1 foot above current sea level and leave everything above that point high and dry. 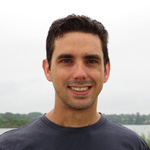 Research by Assistant Professor Chris Hein, one of several new faculty members at the Virginia Institute of Marine Science, shows that the actual inundation process is likely to be far more complex, with shoreline contours themselves changing in response to natural and human-driven changes in sediment supply, coastal storms, and other factors.

Hein began as an assistant professor at VIMS in July, following a two-year postdoctoral research fellowship at the Woods Hole Oceanographic Institution in Massachusetts. He earned his Ph.D. in 2012 at Boston University, where he used fieldwork in Egypt, Brazil, and New England to study the evolution of coastlines as sea level rose following the last Ice Age. His B.S. degree, in geological sciences, is from Cornell University.

VIMS Dean and Director John Wells says, “Sea-level rise is arguably the gravest natural threat facing Virginia in the coming century. Chris’s research helps us to better understand how our coastlines changed in the past due to sea-level rise, how they are changing now and are likely to change in the future, and how we as a society can best respond. We’re extremely pleased to have him onboard.”

Hein says that Virginia is an excellent location from which to pursue his studies because it is “at the heart of one of the coastal regions in the U.S. most vulnerable to climate change and sea-level rise.” “VIMS provides a natural fit and strong foundation for my research,” he adds. “It’s a vibrant, collaborative community that offers nearly endless possibilities to work with leading scientists from across fields to address these challenges.”

Professor Carl Friedrichs is chair of the Physical Sciences Department that Hein now calls home. He says, “A lot of our Department is at the muddy end of the spectrum, studying the behavior of fine-grained sediments in estuaries like Chesapeake Bay. Chris is more at the sandy end, and brings overall expertise in coastal geology—especially associated with barrier islands. That’s a great fit for our studies of Virginia’s Eastern Shore and the Outer Banks.”

Friedrichs says that Hein brings other strengths as well. “Chris is a big thinker who combines classical approaches in coastal geology with cutting-edge geochemical techniques and an interest in rivers. He fills in some of the expertise we lost with the retirement of John Milliman.”

Hein first became interested in geology during family trips to America’s western national parks, and focused that interest during visits to the shoreline of his native Long Island.

“I’ve always been fascinated by how landscapes form,” says Hein. “At the Grand Canyon you can stare down and recognize the billions of years of sediment deposition and millions of years of erosion that it took to form that stunning feature. At the beach, you can literally watch the landscape change with the rise and fall of the tide and the impact of every wave. Coastal zones are dynamic—they look different every day and every season. They’re a fascinating place to study for someone who wants to understand how landscapes evolve.”

Coastal zones are also a front line in humanity’s intersection with climate change. “More than 600 million people live in areas less than 30 feet above sea level,” says Hein. “They’re home to 200 cities with populations greater than 50,000, and trillions of dollars of infrastructure.” 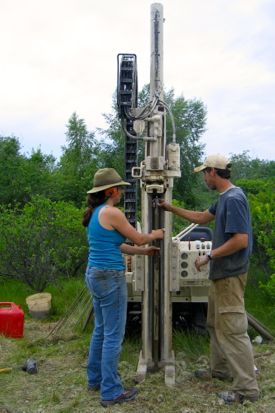 Hein notes that coastal zones will respond to three interconnected processes as climate warms: changes in sea level, changes in the intensity and frequency of storms, and shifts in sediment supply. He’s particularly interested in the latter, with research to determine how natural changes in past climate have affected the erosion of sediment and its transport to the coast by rivers; how humans have modified sediment supplies through dam building, dredging, and the construction of jetties and seawalls; and how these processes are likely to change with global warming and sea-level rise.

“I’m interested in how different beaches and barrier islands have responded to these factors in the past in order to better understand and predict how they will respond in the future,” says Hein. “That’s important because the impacts of climate change and sea-level rise are likely to be highly localized, non-uniform, and non-linear.”

For example, Hein points out that “Climate change won’t simply lead to coastal erosion everywhere. In some places, more intense rainfall and coastal storms may actually provide enough new sediment from rivers and headland erosion to cause beaches and barriers to grow higher and wider.”

He cautions, however, that such situations are likely to be the exception rather than the rule. In fact, what worries him is that “many of the world’s most vulnerable populations live within the lowest-lying coastal zones—areas that will see some of the most dramatic changes as sea level rises.”

Since arriving at VIMS four months ago, Hein has already earned two research grants from the National Science Foundation, an accomplishment that Friedrichs terms “remarkable.”

The first grant will allow Hein and collaborators to study long-term changes in the amount and types of sediment and carbon carried by the Ganges and Brahmaputra rivers, and to use these data to track shifts in the Indian monsoon and changes in vegetation cover in the Indian subcontinent and Himalayan Mountains.

The second, “Sediment Supply in a Regime of Accelerated Coastal Erosion: Paleo-Perspectives, Anthropogenic Influences and Future Challenges” was awarded through NSF’s new Science, Engineering, and Education for Sustainability program, which is designed to provide science-based guidance for better decisions regarding the nation’s environment.

Looking to the future, Hein sees the need for increasingly detailed studies and understanding of climate change and its impacts on coastal ecosystems.

“This is the direction I see the science heading,” he says, ”a trend toward regional and local predictions that are of more use to policy makers and stakeholders. Creating these will require a fine-scale understanding of predicted climate-change impacts, which is precisely the kind of science that excites me.”

“Humanity can adapt to changes in the coastal zone,” Hein adds, “but it will take proper planning and management built on the best information science has to offer.”