An annual aerial survey led by researchers at the Virginia Institute of Marine Science shows that the abundance of underwater grasses in Chesapeake Bay and its tidal rivers declined 24% between 2011 and 2012, approaching lows last reported in 1986. This third year of decreasing grasses is the cumulative result of unfavorable growing conditions since 2009.

The survey results, announced today by the Chesapeake Bay Program (CBP), revealed that  the Bay had 48,191 acres of grasses, a decrease of 14,892 acres from 2011 estimates. Underwater grasses are critical to the Bay ecosystem, providing habitat and nursery grounds for fish and blue crabs, serving as food for animals such as turtles and waterfowl, clearing the water by reducing wave action, absorbing excess nutrients, and reducing shoreline erosion.

Underwater grasses are also an excellent measure of the Bay's overall condition because their health is closely linked to water quality. Healthier waters can be supported by pollution-controlling efforts including better agricultural and urban management practices, upgrades to wastewater treatment plants, and more conservation landscaping by homeowners.

During the annual aerial survey, flown from late spring to early fall, scientists chart Bay grasses by 3 “zones”—upper, middle and lower Bay—and into subsections by tributaries, called “segments.” Overall declines were evident last year in all of the zones with only a few bright spots in specific locations. An executive summary of the  2012 SAV report is available on the VIMS website.

Dr. Robert "JJ" Orth, head of the Submerged Aquatic Vegetation (SAV) program at VIMS and coordinator of the annual Bay-wide survey, says “It has been a rough few years for Bay grasses and we were not terribly surprised by the survey results. In 2010, the unusually hot summer caused some grasses to die back in the lower Bay after we had completed the 2010 survey for that region. 2011 brought a wet spring and muddy conditions during the early growing season and a fall with two major storms that resulted in decreased water quality again. Between these factors and warming water temperatures, the Bay’s grass beds face an uphill challenge." 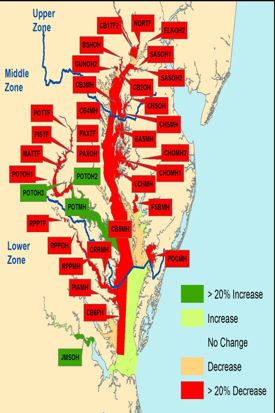 Lee Karrh of the Maryland Department of Natural Resources and Chair of CBP's SAV Workgroup, adds "In previous years, when we’ve had declines in one part of the Bay, they were offset by gains in other areas. 2012 is unusual because we saw losses in the fresh, brackish, and salty parts of the Bay simultaneously. In the somewhat salty waters in the mid-Bay zone, the reduction in diversity of grass species over the last 30 years means that single-species grass beds there are less resilient to changes in water quality and temperature that we’ve seen in the last couple of years."

Nick DiPasquale, Director of EPA's Chesapeake Bay Program, says "We have both cause for concern and encouragement; while the declines are worrisome, there are still some signs of resilience in the Bay. It is good to see the Susquehanna Flats underwater grasses remaining hardy and exciting to see emerging beds in the James River.  However, this year’s data is a sobering reminder of how imperative it is to continue our restoration efforts."

To help stakeholders visualize survey results and Bay grass health, the CBP also announced creation of a new dynamic online mapping tool that anyone can use to see how the Bay’s underwater grasses have changed in location, abundance, and species composition during the last 30 years. The mapping tool is availble on-line at http://www.chesapeakebay.net/visualization/baygrasses.

In 2012, of the 93 tributary segments mapped during the survey, grasses increased in 17, decreased in 47, and remained unvegetated in 29 segments. The CBP scientists in both states believe losses of the Bay’s underwater grasses in the upper and middle Bay zones most likely reflect the effects of Hurricane Irene and Tropical Storm Lee in the fall of 2011 and the resulting sediment they added to the system. In the middle and lower Bay, grasses were subjected to excessively warm waters in summer of 2010 and poor water clarity since then has kept them from rebounding.

While these losses are concerning, two areas showed notable resilience and expansion. Although the large grass bed at the head of the Bay on the Susquehanna Flats decreased in size, the grasses there remained robust and very dense. In addition, grasses continued to increase in the mainstem of the James River.