A joint study by local oyster growers and researchers at the Virginia Institute of Marine Science shows that moving farmed oysters into saltier waters just prior to harvest nearly eliminates the presence of a bacterium that can sicken humans.

The findings—reported by VIMS professors Kim Reece and Howard Kator, and local oyster growers Thomas Gallivan, A.J. Erskine, and Tommy Leggett—may offer a relatively low-cost solution to a controversial change in FDA regulations that many growers believe will eventually affect the oyster industry in Chesapeake Bay.

The Food and Drug Administration’s regulatory change, set to take affect during this year’s harvest season in the Gulf of Mexico, requires Gulf shellfish growers to eliminate the bacterium Vibrio vulnificus from shellfish through the use “post-harvest processing” or “PHP.” PHP methods include low-temperature pasteurization, flash freezing, high pressure, and low-dose irradiation.

The FDA rule does not currently pertain to oyster growers in Chesapeake Bay, but local growers and scientists believe it will eventually apply here and in other U.S. oyster-growing regions as well. 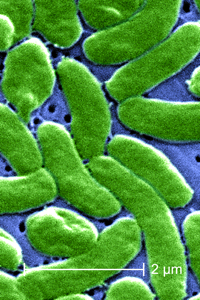 The FDA says PHP is needed to eliminate Vibrio vulnificus from Gulf shellfish because the bacterium is implicated in about 25 deaths and 90 cases of illness in the U.S. each year. Most of these illnesses result from consumption of raw oysters and clams from the Gulf by persons with liver disorders (including hepatitis, cirrhosis, and liver cancer); hemochromatosis (a disorder in which too much iron is absorbed from the gastrointestinal tract); or diabetes; and those with weakened immune systems due to treatments for HIV/AIDS or cancer.

The Gulf is the nation’s leading source of oysters, supplying 70% of nationwide demand, including up to 50% of the oysters processed by local shucking houses.

Some members of the Virginia and Gulf aquaculture industries counter that existing PHP methods are too costly for an industry dominated by small, local operators; change the texture and taste that oyster lovers crave; and would duplicate existing oyster-sanitation rules. They also note that infections from Vibrio vulnificus account for only 0.3% of deaths attributed to food-borne illnesses, and argue that the FDA should focus on reducing deaths from Salmonella and Listeria instead.

The VIMS-industry team contends that moving oysters to saltier water—what they call an “oyster relay”—may be just as effective and much cheaper than other PHP methods, which they say are “expensive, capital intensive, difficult to use with large numbers of oysters, or not readily available.”

During their study—funded by Virginia Sea Grant’s Fishery Resource Grant Program—the team moved farmed oysters from one relatively low- and two moderate-salinity sites in Chesapeake Bay (the Coan River, the York River, and Nassawadox Creek) to Little Machipongo Inlet on the seaside of Virginia’s Eastern Shore, where waters are close to full ocean salinity. They moved about 200 oysters from each site, carrying them by truck in insulated coolers. 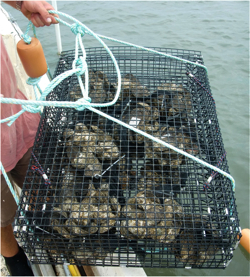 The team ran two experiments, one beginning in mid-August 2010 and the other in mid-September. Both dates lie within the FDA’s 2010 “risk season,” which roughly coincides with the adage that raw oysters shouldn’t be consumed in months without an “r.” The team sampled the transplanted oysters upon collection, after one week, and again after two weeks, using molecular diagnostics to measure levels of Vibrio vulnificus in oyster tissues.

Their findings, say Reece, “clearly show that high-salinity relay is a potentially viable method to reduce Vibrio in oysters grown and harvested in Virginia.”

Their molecular studies, measured by the “most probable number” (MPN) of Vibrio vulnificus bacteria in each sample, shows that exposure to salty water decreased Vibrio vulnificus levels from a high of 750 MPN per gram of meat in pre-transplant oysters (with an average of 160 MPN per gram) to less than 1 MPN per gram. The team also found that the shift from fresher to saltier water has little effect on oyster health, with less than 5% mortality even among the oysters experiencing the largest salinity change.

Another important outcome of the study was initial confirmation that a novel part of the team’s research—use of a real-time quantitative polymerase chain reaction (qPCR) assay—worked well to identify Vibrio vulnificus.

The team cautions that further study with a larger number of more highly infected oysters is needed to confirm that an oyster relay can effectively bring Vibrio to the level (less than 30 MPN per gram) required by the Interstate Shellfish Sanitation Conference. The ISSC—a partnership of state and federal control agencies, the shellfish industry, and the academic community—sets the sanitation guidelines that regulate the harvesting, processing, and shipping of U.S. shellfish.