Eleven research teams from the Virginia Institute of Marine Science (VIMS) have received funding from NOAA’s Chesapeake Bay Office to study species that play an important role in the Bay’s ecology, commercial fisheries, and recreational angling.

The VIMS teams will join with partners in academia, industry, and government in both Virginia and Maryland to conduct field and laboratory studies of oysters, blue catfish, cownose rays, soft-shell clams, and striped bass.

NOAA says the goal of these fisheries grants is to advance scientific understanding of key species to benefit Bay restoration efforts, the Virginia seafood industry, and recreational fishermen. The funding was announced during a media briefing at VIMS on November 29th. In addition to the projects funded at VIMS, NCBO officials also announced grants to research teams at Old Dominion and Virginia Commonwealth universities.

NCBO Director Peyton Robertson says “Bringing better science and resource management decisions to Chesapeake Bay is really important. Investing a million dollars here in Virginia is a strong signal that this administration understands the importance of protecting and restoring the Bay, including the plan to achieve oyster restoration in 20 tributaries by 2025, and to ensure the sustainability of the blue crab population.”

VIMS Dean and Director John Wells says the projects “are money well spent, and will provide a definitive, measurable return on investment in terms of the Bay’s economy and health.”

A key aspect of the funded programs is their emphasis on collaboration between stakeholders in Virginia and Maryland. That’s particularly true of the projects dealing with oysters. 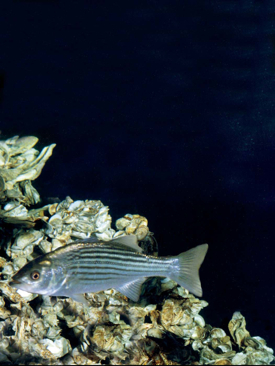 “We’ve all heard that the Bay’s oyster population is estimated to be at only 1 percent of its historic level,” says Robertson, “but we actually don’t know what that distribution looks like.” A project led by VIMS professor Roger Mann will be the first-ever attempt to assess oyster stocks throughout Chesapeake Bay using standardized survey methods, akin to the collaborative process now used to assess the bay-wide blue crab population.

“The Bay-Wide Blue Crab Winter Dredge Survey [a collaboration between VIMS and the Maryland Department of Natural Resources] has been a very reliable tool for understanding the overall crab population and how we should address management strategies,” say Robertson. “A bay-wide oyster stock assessment will provide a similar basis for assessing oyster populations and distribution. It will provide an important tool for fisheries managers in the Bay.”

A related project, led by VIMS researcher Ryan Carnegie and Chris Dungan of the Maryland Department of Natural Resources, will integrate studies of oyster diseases in the two Bay states. “Virginia and Maryland have long maintained separate and incompatible datasets on oyster disease,” says Carnegie. “Integrating these analyses—developing unified rating systems and applying them to current and archived samples—will yield a dynamic bay-wide portrait of oyster disease.”

Carnegie will also lead a study of the relationship between the height of restored oyster reefs and oyster health, while Mark Luckenbach, Lisa Kellogg, and P.G. Ross of the VIMS Eastern Shore Lab in Wachapreague will study how oyster density affects the removal of nitrogen pollution from Bay waters.

Studies of blue catfish are the focus of several of the other NCBO fisheries research grants. Robertson says the goal of these studies is to “weigh the costs and benefits of blue catfish, an introduced species that is the target of a popular recreational fishery but may also have significant ecological effects on other marine life in Chesapeake Bay and its tributaries.” 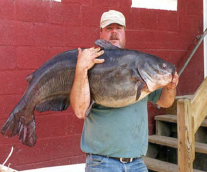 Two of the grants will fund studies of the basic biology and ecology of this poorly studied species. VIMS professor Mary Fabrizio and colleagues will provide the first estimate of population size and survival rates for blue catfish in Chesapeake Bay tributaries, while VIMS professor Rob Latour will quantify the species’ growth rate.

VIMS professor Rob Hale will determine the levels of mercury, PCBs, and pesticides in blue catfish tissues, and investigate how expansion of the blue catfish fishery as a population control strategy might contribute to human consumption of these contaminants.

In addition to blue catfish and oysters, the NCBO also announced funding for studies of soft-shell clams and striped bass.

VIMS professor Rochelle Seitz will partner with colleagues at the Smithsonian Environmental Research Center and the Maryland Department of Natural Resources to investigate what caused the decline of the soft-shelled clam Mya arenaria in Chesapeake Bay, and what steps managers might take to restore this shellfish to Bay waters. Mya supports a significant fishery in Maryland and other Atlantic states, and is an important food source for blue crabs and fish.

Fabrizio will join with VIMS professor Wolfgang Vogelbein, post-doctoral researcher Dominique Lapointe, and colleagues at ODU and NOAA to test the hypothesis that low-oxygen “dead zones” in Chesapeake Bay may be contributing to high rates of mycobacteriosis among Bay stripers, by forcing the fish out of the cool bottom waters they prefer to inhabit during the summer into surface waters whose warmth stresses the fish. Striped bass are the most popular gamefish in Bay waters.