Dr. Jack Musick, emeritus professor at the Virginia Institute of Marine Science, has overseen a global study suggesting that 33 percent of shark, skate, and ray species are threatened with extinction.

The work is part of a major new study of vertebrates by the International Union for Conservation of Nature (IUCN), the world’s oldest and largest environmental network. The IUCN study shows that conservation actions have benefitted a few species of vertebrates around the world during the last few decades, but are too few and far between to slow an overall rapid increase in the number of threatened species.

A summary of the study, “The Impact of Conservation on the Status of the World’s Vertebrates,” will appear in this week’s issue of the flagship journal Science. The study is based on an on-going appraisal of the IUCN Red List, the worldwide standard for assessing the status of species. Red List categories run from “least concern” to “near threatened,”  “vulnerable,” “endangered,” “critically endangered,” “extinct in the wild,” and “extinct.”

Placement in a category reflects a species’ abundance, reproductive rate, geographic range, and other such factors. A “data deficient” category holds species for which there is inadequate information to assess extinction risk based on distribution, population status, or both. 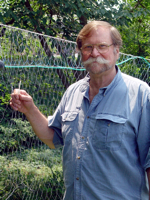 Musick served as co-chair of the IUCN Shark Specialist Group from 1997-2006, and currently serves as Vice Chair-Science. It was in these roles that he oversaw the Red List assessment of sharks, skates, and rays by an international team of more than 100 experts. The team assessed nearly all of the 1,168 described species of these cartilaginous fishes.

The group’s work suggests that 345 of the 1,044 species of cartilaginous fishes studied (33%) are “threatened,” a broad grouping that includes species in the “vulnerable,” “endangered,” and “critically endangered” categories.

Musick cautions that assessing the exact threat level for cartilaginous fishes is made difficult by the group’s large number of “data-deficient” species, itself a consequence of the difficulty and high cost of sampling these underwater creatures.

The assessment shows that threats to cartilaginous fishes (and other vertebrates) occur mainly in the tropics, regions where large numbers of species with restricted distributions coincide with intensive fisheries.

To reduce the threat to cartilaginous fishes, Musick and his co-authors call for a number of conservation actions. These include habitat protection, management of harvest and trade, adoption of new law and policy measures, and enhanced awareness and education campaigns.

The IUCN assessment of cartilaginous fishes includes data from the VIMS Shark Survey, which visits Chesapeake Bay and Virginia’s coastal waters on a monthly basis from May through October. Established by Musick in 1973, it is now the longest running fishery-independent study of shark populations in the world. The survey is now directed by Dr. Tracey Sutton.

Data from the survey have shed light on the conservation status of local sharks. Several of the most common shark species found in Virginia waters are listed on the IUCN Red List:

The IUCN study, led by Dr. Michael Hoffman of the IUCN’s Species Survival Commission, also counted the number of mammal, bird, and amphibian species in each Red List category at various intervals during the last few decades (1988, 1994, 2000, 2004, and 2008 for birds; 1996 and 2008 for mammals; and 1980 and 2004 for amphibians). A total of 25,780 vertebrate species are on the IUCN Red List; one fifth of all known species of this diverse and important group.

Their results, calculated as changes in a “Red List Index,” showed that 156 mammal species, 223 bird species, and 662 amphibian species each moved at least one Red List category closer to extinction over the assessment period. On average, 52 species of mammals, birds, and amphibians move one category closer to extinction each year. (A lack of long-term data prevents a similar assessment for sharks, skates, and rays).

The study also showed that these trends would have been even more pronounced in the absence of recent conservation actions, which were responsible for all but 4 of the 68 cases in which a vertebrate species moved at least one category away from extinction (the four exceptions were improvements resulting from natural processes, such as unassisted habitat regeneration.)

The authors write “IUCN Red List assessments of the world's vertebrate species indicate a net trend towards heightened risk of extinction, but this trend would have been more marked in the absence of conservation actions.”