Teeming with species, tropical coral reefs have been long thought to be the areas of greatest biodiversity for fishes and other marine life—and thus most deserving of resources for conservation.

But a new global study of reef fishes reveals a surprise: when measured by factors other than the traditional species count—instead using features such as a species’ role in an ecosystem or the number of individuals within a species—new hotspots of biodiversity emerge, including some nutrient-rich, temperate waters.

The study, by an international team of researchers including graduate student Jon Lefcheck and Professor Emmett Duffy of the Virginia Institute of Marine Science, appears in this week’s issue of the journal Nature.

The study is based on information collected through the Reef Life Survey program, a "citizen science" initiative developed in Tasmania. The RLS program now operates worldwide, training recreational SCUBA divers to survey numbers of reef animals and supporting their research endeavors.

Stuart-Smith and fellow RLS founder Graham Edgar, also a University of Tasmania professor, highlight the central role the volunteer divers played in contributing to the new study. “The assistance of over 100 dedicated divers has allowed us to look at ecological patterns and processes impossible for scientific dive teams to cover,” says Edgar.

The number of different species in an ecosystem—what researchers call “species richness”—has dominated the scientific view of global biodiversity patterns since the days of Darwin and Linnaeus. It has also long been used as a biological basis for management of imperiled ecosystems.

But, says Lefcheck, ”Just counting species is a really coarse way of understanding diversity. By gathering information on the animal’s traits—what they eat, how they move, where they live—we can understand more about how dissimilar they are. Dissimilarity is the essence of diversity.” 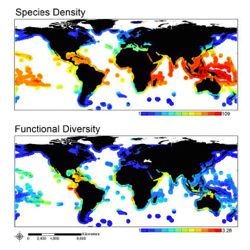 Lefcheck illustrates the team’s new approach to studying biodiversity by reference to a tide pool. “Consider a pool with a fish, a bird, and a crab,” he says. “Now consider one with three fishes. Which is more diverse? Intuitively, we know it’s the one with the fish, bird, and crab. But until recently, ecologists treated each of them as equally diverse, since they both have the same number of species.”

“Most biodiversity censuses simply count species because it’s relatively easy to do,” says Duffy. “But to understand how species help ecosystems work, we need to know how abundant they are and what they're doing. That sounds obvious but such data are much harder to get. Ours is the first study to do this comprehensively, and we find that the extra knowledge paints a very different map of global diversity.”

The team conducted their study by analyzing data from 4,357 standardized surveys conducted by  RLS divers at 1,844 coral and rocky reef sites worldwide. The surveys spanned 133 degrees of latitude and found 2,473 different species of fish.

Moving beyond traditional species counts, the research team noted how the members of each of these species make a living, using a detailed matrix of “functional traits.” These include what the fishes eat (plankton, invertebrates, algae, other fish, or a combination), how they eat it (browsing, scraping, or predation), where they live (in, on, or near the bottom or free-swimming), whether they are active at night or during the day, and how gregarious they are (solitary, paired, or schooling).

“Determining the biology and ecology of these fishes—noting what they do and how they do it—alters hotspots of diversity,” says Lefcheck. “Coral reefs remain the most species-rich habitats on earth, but a trait-based view reveals new areas where the diversity of ways in which fishes function is even higher.”

Lefcheck notes that the team’s study also looked at how individuals are distributed among species—what scientists call “evenness,” and that doing so further alters global diversity patterns. 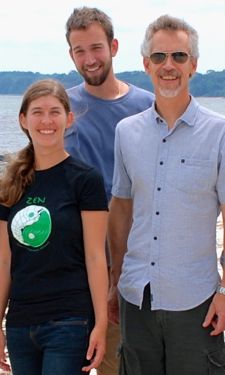 “Coral reefs have lots of species but many are doing largely the same thing, whereas temperate reefs with many fewer species tend to spread individuals out among species that are doing different things,” he explains.

The team’s findings have important implications for planning and management. Lead author Stuart-Smith notes, “Incorporating information on functional traits into monitoring programs will add an extra dimension and greater ecological relevance to global efforts to manage and conserve marine biodiversity”.

Says Lefcheck, “Loss of species in a community in which all species are doing different things may have greater consequences, since each species plays a unique role that can't be filled by any other species. Investing resources in conserving the most non-redundant—and therefore vulnerable—communities may have the greatest impact.”