A study in today’s issue of Scientific Reports, a new online journal from the Nature Publishing Group, shows that small forage fish like anchovies can play an important role in the “biological pump,” the process by which marine life transports carbon dioxide from the atmosphere and surface ocean into the deep sea—where it contributes nothing to current global warming.

The study, by Dr. Grace Saba of Rutgers University and professor Deborah Steinberg of the Virginia Institute of Marine Science, reports on data collected on an oceanographic expedition to the California coast during Saba’s graduate studies at VIMS. Saba, now a post-doctoral researcher in Rutgers’ Institute of Marine and Coastal Sciences, earned her Ph.D. from the College of William and Mary’s School of Marine Science at VIMS in 2009. The expedition, aboard the research vessel Point Sur, was funded by the National Science Foundation. 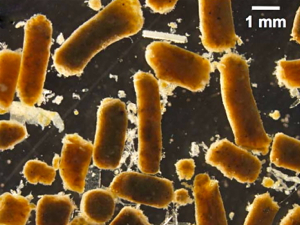 The study’s focus on fish is a departure for Steinberg and colleagues in her Zooplankton Ecology Lab, who typically study tiny crustaceans called copepods. Research by Steinberg’s team during the last two decades has revealed that copepods and other small, drifting marine animals play a key role in the biological pump by grazing on photosynthetic algae near the sea surface, then releasing the carbon they’ve ingested as “fecal pellets” that can rapidly sink to the deep ocean. The algal cells are themselves generally too small and light to sink.

“’Fecal pellet’ is the scientific term for “poop,” laughs Steinberg. “Previous studies in our lab and by other researchers show that zooplankton fecal pellets can sink at rates of hundreds to thousands of feet per day, providing an efficient means of moving carbon to depth. But there have been few studies of fecal pellets from fish, thus the impetus for our project.”

Saba says, “We collected fecal pellets produced by northern anchovies, a forage fish, in the Santa Barbara Channel off the coast of southern California.” She determined that sinking rates for the anchovies’ fecal pellets average around 2,500 feet per day, extrapolating from the time required for pellets to descend through a cylinder of water during experiments in the shipboard lab.

At that rate, says Saba, “pellets produced at the surface would travel the 1,600 feet to the seafloor at our study site in less than a day.” 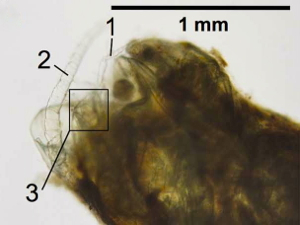 Saba and Steinberg also counted the pellets’ abundance—up to 6 per cubic meter of seawater, measured their carbon content—an average of 22 micrograms per pellet, and painstakingly identified their partly digested contents—mostly single-celled algae like dinoflagellates and diatoms.

“Twenty micrograms of carbon might not seem like much,” says Steinberg, “but when you multiply that by the high numbers of forage fish and fecal pellets that can occur within nutrient-rich coastal zones, the numbers can really add up.”

Saba and Steinberg calculate that the total “downward flux” of carbon within fish fecal pellets at their study site reached a maximum of 251 milligrams per square meter per day—equal to or greater than previously measured values of sinking organic matter collected by suspended “sediment traps.”

“Our findings show that—given the right conditions—fish fecal pellets can transport significant amounts of repackaged surface material to depth, and do so relatively quickly,” says Saba.

Those conditions are likely to occur in places like the western coasts of North and South America, where ocean currents impinge on continental shelves, bringing cold, nutrient-rich waters from depth into the sunlit surface zone.