A cobia caught this June provides hope that the species could be a candidate for stock enhancement. Since its release by researchers in 2008, the hatchery-raised and tagged fish has made 3 round-trips between Chesapeake Bay and the Florida Keys, doubled in size, and gotten caught at least twice.

“This is a very important recapture,” says Mike Oesterling of the Virginia Sea Grant Marine Extension Program at VIMS. “This one fish shows that cobia raised in a tank and fed pellet food will survive and behave as if they were wild fish when they’re released.”

Oesterling and researchers with the South Carolina Department of Natural Resources conducted the study, which tagged and released hundreds of juvenile cobia in 2008. One year later, 20 percent of the cobia released were captured, considered to be a good return rate. In the second year (2010), only this particular fish and one other were captured and reported. Then, this June, an angler fishing off the tip of the Eastern Shore recaptured it and reported it to be about 39 inches long and in good condition. 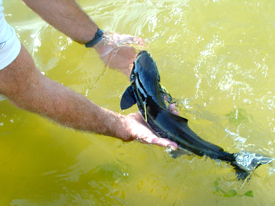 The cobia tag-and-release study was part of an initiative—funded by NOAA and Sea Grant—to proactively evaluate species’ potential for stock enhancement, a strategy for boosting wild populations by releasing hatchery-reared fish. Cobia proved a good candidate for stock-enhancement research. Not only is cobia popular among anglers, but researchers already knew how to successfully spawn cobia in a lab from earlier aquaculture research.

With the successful recaptures of this particular fish, fisheries managers now know that the species can be raised onshore and used for stock enhancement. However, Oesterling adds, “There’s no evidence that cobia are overfished or in need of stock enhancement at this point, but this kind of due diligence puts one more tool in the management toolbox.”

As for the cobia that made it all possible, it won’t get caught again. Now of legal size, it was not released but enjoyed by hungry anglers that evening.