A $199,000 grant from the National Fish and Wildlife Foundation will allow researchers at the Virginia Institute of Marine Science to help protect Werowocomoco—one of the most important Native American sites in the eastern U.S.—from shoreline erosion and sea-level rise. 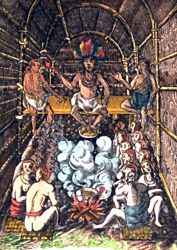 Occupied for the last 10,000 years, Werowocomoco was the seat of power for Algonquian Chief Powhatan when English colonists arrived at Jamestowne in 1607. The site—where Captain John Smith was purportedly saved by Powhatan’s daughter Pocahontas—occupies an eroding headland on the north side of the York River about half way between Yorktown and West Point. Bob and Lynn Ripley, the current landowners, have graciously allowed a conservation easement and archeological excavations on the 57 acres of their property that form the core of the historic village.

VIMS researcher Donna Milligan, who leads the project in collaboration with colleagues at the National Park Service (NPS) and the Virginia Department of Historical Resources (VDHR), says “This is about protecting a one-of-a-kind archeological site. Every day, erosion is removing artifacts from the bank, and we can fix that. We can build a living shoreline that somewhat mimics what the Native Americans would have hunted and fished, the marshy area that would have fringed the whole shoreline in their time.”

The main feature of the restoration project will be two or more sills—long piles of rock placed just offshore and parallel to the low, sandy cliff that forms the existing shoreline. Between sill and shore, sand and marsh grasses will be added for additional habitat and protection. Bringing an educational component to the project, the marsh grasses will be planted and monitored by students from Ware Academy in Gloucester. All told, the project will create about 15,000 square feet of marsh while keeping more than 900,000 pounds of sediment and nearly 500 pounds of phosphorus and nitrogen out of the York River each year. 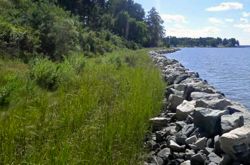 Milligan says VIMS’ role in the project is to create the conceptual plan for managing the shoreline—figuring out where to place the sills, how long and high they should be, and the distance between them. That requires careful analysis of a host of site-specific factors, including tidal range, water depth, prevailing wave direction and height, frequency of storm surge, the prevalence of boat wakes, geometry and orientation of the shoreline, height and composition of the bank, and any existing shoreline-defense structures.

Scott Hardaway, Director of VIMS’ Shoreline Studies program, says the ultimate goal of the restoration is “a diverse coastal habitat that supports marine life, land animals, and birds, while protecting the shoreline and archaeological resources from storms and sea-level rise.”

The effects of sea-level rise at the site are clear. Analysis of aerial imagery by VIMS researchers shows that the most exposed stretches of the Werowocomoco shoreline are eroding at a rate of more than 1.5 feet annually, with nearly 100 feet of retreat since the 1930s. Remnant marsh outcrops, widening marsh creeks, and “ghost” trees provide further evidence of rising waters.

William & Mary Professor Martin Gallivan, head of archeology at Werowocomoco, says “This area has seen considerable erosion since the site represented a Native town, with recent hurricanes producing visible damage to the bluff.” 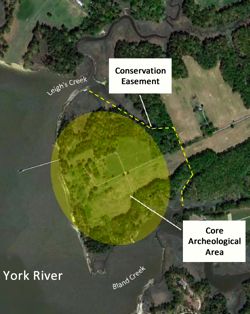 The area of greatest concern along the 1,300-foot Werowocomoco shoreline is a 300-foot stretch bisected by an existing pier. “Erosion in this section threatens the connection between the pier and the bank,” says Milligan. “We’ve identified this as a critical area and will address it in Phase 1 of the overall shore-protection system.” Protection will likely come via construction of two sills, each about 125 feet long and separated by a 50-foot gap for the pier.

Hardaway adds “We’ll prepare a Joint Permit Application for the entire site, then put construction of the Phase 1 sills out to bid as a design/build project to local marine contractors.” Construction costs are by far the largest part of the project budget. Protection of the remaining Werowocomoco shoreline awaits additional funding.

Preserving the pier is a key part of the long-term plan for the site. The plan—prepared by the Ripleys, NPS, and VDHR—ultimately sees public ownership and permanent protection of the entire 250-acre property, with land access from the Gloucester County road system and water access by boat from another existing pier at York River State Park—directly across the river and within easy driving distance of Jamestown, Colonial Williamsburg, and other hubs of historical tourism. Werowocomoco is also part of the Captain John Smith Chesapeake National Historic Trail. This water trail—the first of its kind in the U.S.—follows the historic routes of Smith’s travels based on his maps and journals.

“With docks on both sides of the river, water access to Werowocomoco is easily carried out and will provide an exciting and historic visit,” says Milligan.  Indeed, the National Park Service believes that visitation to Werowocomoco could ultimately rival that of Jamestown.

Says NPS Superintendent Chuck Hunt, “Werowocomoco could certainly become one of the major heritage tourism sites in the region. It would not only be a major factor in the local economy but also play an important role in helping people to understand the life of American Indians at the time of European contact.”

Adds Gallivan, “The archaeological research at Werowocomoco has been conducted in partnership with Virginia Indian tribes who have expressed a special connection to the site and its long history as a landscape of Native power. This shoreline project will provide critical protection for Werowocomoco’s richest archaeological deposits. The shoreline was the residential core of the town, and the archaeology in this area includes artifacts, food remains, and the footprints of Powhatan houses. My colleagues and I in the Werowocomoco Research Group agree that this project will provide immeasurable benefits for the site. The stabilization plan is carefully considered and will not harm the archaeological record.”