Data from long-term monitoring programs at the Virginia Institute of Marine Science will allow researchers to gauge how a large plume of sediment from Hurricane Irene and Tropical Storm Lee may impact water quality and underwater grasses in lower Chesapeake Bay.

VIMS professor Ken Moore says “Without the background data provided by our monitoring programs, we’d have no way of quantifying both the short-and long-term impacts of these one-time events, and their potential effects on Bay health and restoration efforts.”

Moore is chair of the Biological Sciences Department at VIMS and research manager for the Chesapeake Bay National Estuarine Research Reserve (CBNERR), a federal program on the VIMS campus that maintains 6 sites along the salinity gradient of the York River.

The researchers’ main concern is the heavy rainfall that the consecutive storms brought to the Bay watershed, and the resulting plume of river-borne sediments now entering Bay waters. The sediments decrease water clarity—potentially affecting sunlight-loving baygrasses—and can bury bottom-dwelling organisms such as oysters. They may also carry nutrients and contaminants washed from flooded farms, homes, and businesses. 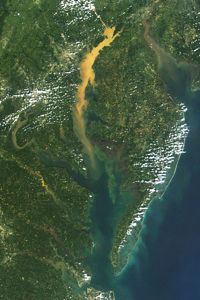 NOAA reports that Irene and Lee brought 24-32 inches of rain to portions of the Chesapeake Bay watershed between August 26th and September 9th, with a band of particularly heavy rainfall along the course of the Susquehanna River. The Susquehanna is the Bay’s single largest tributary, providing nearly 50 per cent of its freshwater.

Moore says that current efforts to study the plume are being organized by NOAA, USGS, EPA, and state agencies in Maryland and Virginia. Scientists are initially focusing their attention near the Susquehanna’s mouth, where the plume first entered the Bay.

“Right now most of the sediment is in the upper Bay,” says Moore, “but we expect it to make its way southward along the western shore of the Bay toward the mouths of the Potomac, Rappahannock, York, and James rivers over the coming weeks and months.”

Moore and colleagues at VIMS and elsewhere will observe the plume using the Virginia Estuarine and Coastal Observing System (VECOS), a network of fixed and mobile sensors designed to monitor water quality within the Commonwealth’s Bay waters.

They plan to extend operation of their “profiler stations”—usually used to track summertime incursions of low-oxygen water—into the fall, in order to pick up any low-oxygen signals associated with the plume’s arrival. Their other monitoring stations typically run through November, by which time, says Moore “we’ll certainly see some effect if there is any.”

Moore also plans to conduct several “Dataflow” cruises through the plume in coming months. Dataflow is a compact, self-contained instrument that maps surface water quality from a moving boat, at speeds of up to 30 mph.

The baygrass monitoring program at VIMS, led by professor JJ Orth, has been using aerial photography and field observations to measure the distribution and density of underwater grass beds throughout Chesapeake Bay since 1978.

Orth says that he and other baygrass researchers are “concerned about the extent of the sediment plume and how long it might persist,” but adds that “we won’t really know its full impact on grass beds until next spring.” That’s because baygrasses naturally go dormant during the winter months.

Orth says that one positive outcome of the storm could be transport of baygrass seeds and propagules to areas of the Bay where the grasses do not currently occur.

In an ironic twist, Irene and Lee not only brought the rainfall and run-off that concerns the researchers; the storms also precluded them from gathering this year’s aerial photography of baygrass coverage in the upper Bay.

It’s unfortunate,” says Orth, “but that’s the name of the game. We always plan to fly the upper Bay near the end of August and first part of September when the baygrass beds are at their greatest extent, but Irene came just too soon.”

Moore and Orth stress that Irene and Lee—even combined—are unlikely to impact baygrasses or other Bay organisms as severely as did Tropical Storm Agnes in 1972, at least in the lower Bay.

Agnes was particularly harmful to baygrasses because it struck in June, during the grasses’ summer growth period. Irene and Lee passed over the region in late August and early September, when the grasses are starting to die back with the onset of fall.