Professor John Milliman of the Virginia Institute of Marine Science has studied a lot of rivers during his nearly 50-year research career. Lately he doesn’t like what he sees. 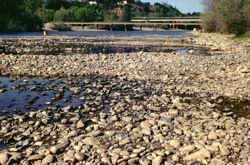 Milliman—who has compiled the world’s largest river database with records from 1,534 rivers around the globe—is troubled by the confluence of a growing human population, increased water use, and decreased river flow. He sees the pattern worldwide, with his attention most recently focused on the drought-parched American West.

California, now in the second year of a severe drought along with other western states, is struggling to allocate its increasingly limited water resources among a bevy of competing users, including farmers, homeowners, industry, and wildlife. The state just had its driest November to January period on record, and a statewide average of only 6 inches of rain for all of 2013, half the long-term norm. A recent storm helped "green the place up a bit," says Milliman, but "the reservoirs are still shockingly depleted."

Helping California to resolve its water woes are VIMS professors Elizabeth Canuel and Rob Latour, who have been invited as out-of-state experts to advise policymakers and resource managers as they struggle to maintain a healthy ecosystem in the Sacramento-San Joaquin River Delta while much of its water is diverted to the cities of Southern California.

Canuel is a member of the Delta Stewardship Council’s Independent Science Board, while Latour advises the Council and the State Water Resources Control Board.

In addition to their scientific expertise, the selection of Canuel and Latour reflects a desire to ensure independent advice regarding an issue with huge economic, social, and environmental consequences. The Delta’s water is crucial to California’s $45 billion dollar agriculture industry, serves as a main source of drinking water for Southern California’s 25 million residents, and historically supported a vibrant wetland that—although now largely converted to farmland and channeled waterways—still draws hunters and anglers.

California’s current drought has made the always-contentious task of distributing the state’s water even more difficult, says Milliman, because it’s affecting not only the typically arid southern regions of the state, but the historically wetter northern regions as well. 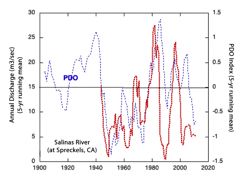 “The Sacramento, California’s largest river, is the major water source for not only the San Francisco area but for Southern California,” says Milliman. “But during the last two winters it’s had very little discharge. There has been little precipitation in the mountains, either snow or rain, and the discharge last winter and spring, as well as this winter, was only about half of normal.”

Based on his discovery of a strong correlation between precipitation in the western U.S. and the “Pacific Decadal Oscillation”—a 40-year fluctuation in ocean heat—Milliman also cautions that the current drought is likely to last for 10 to 15 more years.

“Oceanic drivers affect precipitation and discharge on the West Coast,” he says. “The PDO is the controlling force, with almost a perfect correlation between a cold PDO and low discharge in rivers across the southern tier of the U.S.—including the San Diego, Salinas, San Juan, Colorado, and Suwanee.”

Towards the end of the last cold, rain-squelching episode of the PDO, in 1977, California’s population was 23 million people. It now stands at 38 million. That makes Canuel and Latour’s task—helping state agencies provide a reliable water supply while also protecting and restoring the Delta ecosystem—even more daunting.

Canuel, a geochemist who has studied sediment discharge in river basins worldwide, was invited to serve on the Council’s Independent Science Board in 2010, for a 5-year term. Her selection recognizes the Delta’s reliance on not only a healthy flow of water, but of river-borne sediment and organic matter. Dr. Cliff Dahm, the Delta Science Program’s former lead scientist, says “Liz’s expertise in the biogeochemistry of aquatic and sedimentary systems meets a critical need. We’re fortunate to have a scientist of her stature onboard.”

Canuel says the Board’s current focus is on “reviewing the Environmental Impact documents for the Bay Delta Conservation Plan, a comprehensive strategy that seeks to restore fish and wildlife while improving the reliability of water supplies. If accepted, the plan will guide restoration and water supply for the next 50 years.”

She cautions, however, that restoration of the Delta is challenged by a number of factors. “The ecosystem is influenced not only by reductions in freshwater flow, but by ‘legacy’ sediments and toxins delivered during the gold-mining era. It also faces threats from invasive species and pesticides, the loss of water quality and habitat, and sea-level rise.”

Canuel notes that many of these stressors influence Chesapeake Bay as well. “Information from these seemingly different systems can inform science and restoration efforts in both regions,” she says, “and contribute to a growing understanding of how estuarine systems respond to development, nutrients, and climate change.“

Latour, a fisheries scientist who directs the Multispecies Fisheries Research Program at VIMS, was tapped by California’s State Water Resources Control Board and Delta Stewardship Council for his expertise regarding the population dynamics of striped bass, shad, smelt, and other estuarine fishes that call the Delta home.

Latour’s service began in spring 2012, when the Board invited him to help review and update the Bay Delta Conservation Plan. Most recently, he was invited in early February to assist the Council by advising an independent panel of experts on how outflow from the Delta might impact fish populations. Latour has studied this issue exhaustively by comparing data from California’s Department of Water Resources and its Division of Fish and Wildlife.

Latour says his analysis confirms that flow is an important part of fisheries ecology in the Delta, but, he adds, “It’s not just the amount of water, there are other things going on in the ecosystem that are important when trying to manage the fish resources. Those include food availability, fish predation, and the efficiency of the gear used for fishery surveys.”

“Flow is kind of like fishing,” says Latour. “It’s something that we as humans can control, so it becomes an important management question. But fish abundance depends on far more than just flow. That’s the basic message I try to get across.”

For his part, Milliman sees reduced consumption as the most viable long-term approach for dealing with water scarcity. He cites examples from around the world—particularly China, the Middle East, North Africa, Southeast Asia, and North America—where dam-building, groundwater withdrawal, “inter-basin transfer,” desalinization, and other supply-side approaches to water management have provided short-term solutions but with long-term social, economic, and environmental costs.

“Reducing consumption—particularly in agriculture through development of drought-tolerant plants and more efficient irrigation methods—has its own costs,” says Milliman. “But given that freshwater is a finite resource, using less seems the best solution.”