Use data on types of litter to inform educational efforts

As beach season heats up around Chesapeake Bay and the nation, graduate students at the Virginia Institute of Marine Science are leading a local effort to help clean the Gloucester Point shoreline.

They are doing so as part of World Oceans Day in June, the International Coastal Clean-Up in September, and Gloucester County’s ongoing Clean Community Program. They forego the Chesapeake Bay Foundation’s annual Clean the Bay Day because it regularly falls just after finals.

During the last two cleanups—the most recent on June 9th—students in William & Mary’s School of Marine Science at VIMS partnered with faculty, staff, nearby residents, and a local Brownie Troop to remove more than 200 pounds of trash from the Gloucester Point and VIMS beaches. Cigarette butts are by far the most common object, with more than 6,000 collected to date. Also common are food wrappers (1,273) and plastic bottle caps (227). 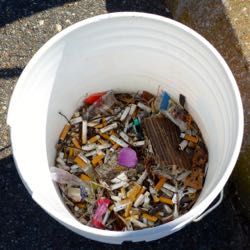 “All this trash from under a mile of coastline,” says master’s candidate Kelley Uhlig, who led last fall’s cleanup efforts as chair of the VIMS ‘Green Team.’ Her concern with coastal litter stems directly from her master’s research, in which she’s investigating how ‘microplastics’ and the chemicals they carry impact the Chesapeake Bay ecosystem.

Microplastics—no bigger than a pencil eraser and often much smaller—form as waves, sunlight, and animals break down larger pieces of plastic trash. Their abundance in marine waters is growing worldwide, as are concerns about their impacts. In fact, the focus of this year’s World Oceans Day celebration was microplastic pollution.

VIMS professor Rob Hale, Uhlig’s advisor and an international expert on chemical contaminants in seawater, is using funding from the National Oceanic and Atmospheric Administration to study how microplastics might absorb and release flame retardants and other chemicals added to household products. Microplastics are commonly small enough to be eaten by animals, thus allowing any absorbed contaminants to enter and impact marine food webs. 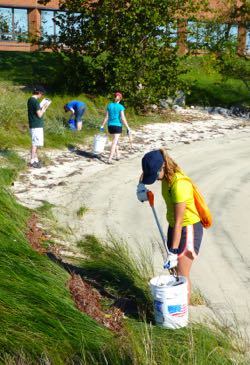 Participants in the fall 2016 cleanup also collected almost 400 zip-tie pieces, proving that VIMS itself is not immune from the inadvertent release of plastic into the environment. “Our volunteers picked up 397 pieces of zip ties near the oyster pile,” says Uhlig. Used by researchers to connect oyster cage panels for nearby field trials, the zip ties can break due to rough seas or when the cages are handled.

The good news is that—after being alerted to the problem—VIMS researchers have re-doubled their efforts to locate and retrieve any zip-tie fragments. No zip ties were recovered during the most recent beach cleanup, and event organizers hope for a continuation of that trend during the next cleanup in September.

Indeed, addressing the marine litter problem through education is one of the cleanup organizers’ main objectives. “Our goal isn't just to clean up the trash that is already on the beaches,” says Thibodeau. “We hope that by documenting and sharing the size of the problem, it will encourage everyone to make even more of an effort to not litter in the first place.”

Leslie Bowie, Gloucester County’s Clean Community Coordinator, shares that goal. She says an effort to provide beachgoers with portable ashtrays has stalled due to closure of the beachfront concession stand where they were previously handed out, but she is working behind the scenes to restart the program.

“My committee is really interested in making those available,” says Bowie. “It’s very clear from the VIMS data that cigarette butts are a major piece of our litter.” She is now working with Uhlig, Thibodeau, and others on a plan to offer the portable ashtrays directly to smokers—particularly to those on the beach and casting a line from the Gloucester Fishing Pier.