When it comes to nursery habitat, scientists have long known that blue crabs prefer seagrass beds compared to open areas in the same neighborhood.

A new study by researchers at the Virginia Institute of Marine Science refines that knowledge, showing that it’s not just the presence of a seagrass bed that matters to young crabs, but also its quality—with denser beds holding exponentially more crabs per square meter than more open beds where plants are separated by small patches of mud or sand (compare images). 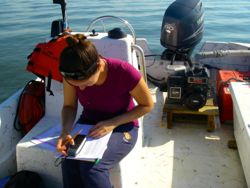 “Vegetated habitats, particularly marsh and seagrass, have long been known as nurseries for blue crabs,” says Ralph, “with many previous field and lab studies showing higher density, survival, or growth of juveniles in seagrass habitats compared to un-vegetated areas nearby.”

“Our study,” she adds, “is one of the few to address the role of habitat complexity within seagrass beds, and the first to show on a broad scale that—all else held equal—denser, higher-quality grass beds hold more juvenile crabs.”

Ralph says the team’s findings are important because they “suggest that the quality of seagrass habitat can influence the population dynamics of blue crabs on a baywide basis.” That raises concern given the historical decline in eelgrass—the Bay’s main seagrass species—and projections of the continued decline of this cool-water species as water temperatures rise during the coming decades due to climate change.

“The potential for a future disappearance of eelgrass from the Bay is quite disconcerting given that the blue crab fishery was declared a federal disaster in 2008 and only recently recovered due to management actions by the Virginia Marine Resources Commission and other agencies in the Bay,” says Lipcius. Tempering the team’s concern are studies suggesting that blue crabs may also be able to use other, more heat-tolerant species like widgeon grass for nursery habitat as the Bay warms. 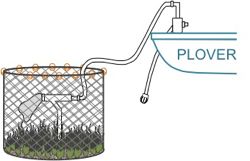 The team conducted the fieldwork for their study between 2007 and 2008, recording blue crab numbers and the percentage of seagrass coverage at 104 randomly selected sites along the eastern and western shores of the lower Bay.

Team members caution that their study was conducted at a time when historically low numbers of juvenile blue crabs were entering the population each year, likely due to overfishing and environmental factors. That might help explain one of the study’s more unexpected results: contrary to basic ecological theory, the observed increase in the number of crabs did not level off as seagrass coverage approached the highest levels.

“The crab’s lack of a threshold response to vegetation cover could have been caused by low densities of juveniles overall,” says Lipcius. “We’d like to repeat our study during a period of high recruitment to test the generality of the findings.”

The good news is that they may be able to do that fairly soon, given the growing number of adult females in the Bay since 2008 in response to the fisheries management framework established that year. Each adult female spawns an average of three million new crabs each brood, and releases about three broods per year.