Recent surveys by researchers at the Virginia Institute of Marine Science reveal an unprecedented number of young scallops in 2 fishery management areas off the mid-Atlantic coast. The high levels of scallop “seed” should generate significant commercial catches in 3 years, when the scallops are 5 years old.

That’s good news for the continued success of the Atlantic sea scallop fishery, a model of effective collaboration among scientists, resource managers, and commercial fishing interests that now sustains the most valuable wild scallop fishery in the world.

U.S. scallop landings totaled $455.1 million in 2010 (latest available data), with 15% of those dollars accruing to Virginia. Scallopers in the Commonwealth landed $70.2 million worth of the tasty bivalves in 2010, 35% of the total value of Virginia’s seafood landings for the year.

The VIMS surveys are part of the Sea Scallop Research Set-Aside Program, a unique component of the Atlantic Sea Scallop Fishery Management Plan in which commercial scallopers each year set aside proceeds from a portion of their “Total Allowable Catch” to fund scallop-related research. This year’s set aside is for 1.25 million pounds.

VIMS emeritus professor Bill DuPaul, a key figure in establishing the scientist-scalloper partnership in the mid-1980s, says “Scallops are currently valued at $9.35 per pound, so this year’s set-aside will fund more than $10 million of research.” The research is administered through a competitive grant program managed by the National Marine Fisheries Service with input on research priorities from industry advisors. 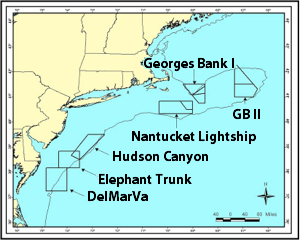 The VIMS surveys provide the population data needed to determine the abundance and health of adult and juvenile scallops within several offshore zones that are managed on a rotating basis. These so-called “closed areas”—the DelMarVa, Elephant Trunk, Hudson Canyon, Nantucket Lightship, and Georges Bank I and II—are opened to fishing when surveys show a sufficient adult population, and closed when the adult population falls below a pre-defined threshold or when surveys show a large number of young scallops.

Restricting access to the juvenile seed scallops allows scallopers to take advantage of the bivalve’s rapid growth between 3 and 5 years of age, when the animals more than double in weight. By waiting, the scallopers get more meat per shell and a more profitable product. 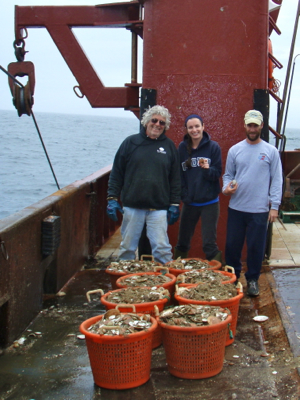 Rudders, DuPaul, and VIMS technician Jessica Bergeron conduct their surveys aboard commercial scallop vessels using a pair of dredges—an 8-foot survey dredge with 2-inch rings and a liner to allow for sampling of the small seed scallops, and a unlined, 14- or 15-foot commercial dredge with 4-inch rings to facilitate comparison with commercial catches. The standard length for each dredge tow is 1 nautical mile. Each survey trip takes 7 to 9 days depending on weather and other “unpredictables.”

The team’s reports of unprecedented numbers of seed scallops come from the first pair of this year’s 5 scallop-monitoring surveys. The first survey took place between April 18-26 within the DelMarVa Closed Area aboard the F/V Stephanie B II out of Seaford, Virginia. The second took place from May 4-9 within the Hudson Canyon Closed Area aboard the F/V Kathy Ann out of Barnaget Light, New Jersey.

DuPaul notes that the team “observed a record-breaking number of scallop seed in both closed areas, including a tow in the northern part of the Hudson Canyon Closed Area that returned more than 13,000 seed.” To put that in perspective, says Rudders “Anything over 100 seed scallops per tow is pretty good, anything above 1,000 is excellent, and anything above 10,000 is remarkable." He adds, "in the course of the work that has been done at VIMS, this was certainly the most seed scallops over a wide area that we have ever observed."

“Our findings are important,” says DuPaul, “because they indicate a successful ‘recruitment’ of 1- to 2-year-old seed scallops. The Mid-Atlantic scallop resource hasn’t had a significant recruitment event in the past several years, which was clearly worrisome. To see the really small seed is very encouraging, as we don’t often see them at all.”

“The 2-year-old scallops should generate significant commercial catches in 3 years,” says DuPaul, “when they are around 5 years old. The areas of highest seed abundance will be protected from commercial harvest and be designated as a closed area. When the areas open, they will be designated as ‘access areas’ with set harvest limits.”

The team’s next survey begins this week, when they plan to embark from New Bedford, Massachusetts aboard the F/V Celtic for a weeklong trip to the Nantucket Lightship Closed Area. Their 2 remaining surveys will take place later this spring within the northern part of Georges Bank Closed Area II and the inshore areas west of the Hudson Canyon Closed Area.

The official reports that are generated from the team's 2012 scallop surveys will be presented and reviewed at the August meeting of the New England Fishery Management Council Scallop Plan Development Team.  The results will be used for scallop management in 2013 and 2014. Previous reports are available from the Hargis Library at VIMS.