Knowledge may help watermen and growers curtail spread of disease

Professor Jeff Shields and colleagues at the Virginia Institute of Marine Science have succeeded in their 15-year effort to unravel the life history of Hematodinium, a single-celled parasite that afflicts blue crabs and is of growing concern to aquaculture operations and wild fisheries around the world.

Knowledge of the parasite’s complex life cycle—gained by rearing of successive generations across a full year in a VIMS laboratory—will help guide efforts to understand the transmission of Hematodinium within crab populations and shrimp farms, and to develop best practices for the handling of animals within Virginia’s fishery for wild-caught blue crabs.

“Describing the entire life cycle of Hematodinium was an important breakthrough for us,” says Shields. “Having all stages in culture means we can now really start picking the life cycle apart to learn what the organism does and how it functions.” 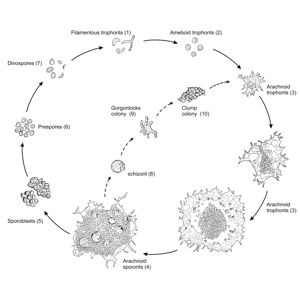 One important finding, says Shields, is “that we now know that the development time in culture is around 40-50 days. That matches well with cycles of infection that we see in the field, which we think occur in relation to molting in the blue crab.”

“We also now realize that the parasite is a broad host generalist,” he adds. “That's important to know for both modeling and management. You can't just fish the blue crabs out of an area and expect to get rid of the pathogen, as it's also present in a number of other host species, including amphipods, fiddler crabs, spider crabs, mud crabs, and other swimming crabs.”

The team’s achievement—funded in part by a 5-year grant from the National Science Foundation—was reported in the journal Parasitology, with Dr. Caiwen Li as lead author. Li authored the paper while a post-doctoral researcher in Shield’s Crustacean Diseases Laboratory on the VIMS campus in Gloucester Point; he is now a professor at the Chinese Academy of Sciences’ Institute of Oceanology in Qingdao, China.

Hematodinium was first reported from the Eastern Seaboard in the mid-1970s, and first noted in Virginia’s blue crabs in the early 1990s. During disease outbreaks, crab mortality can reach 50% in crab pots, and 75% in shedding facilities for soft-shell crabs on Virginia’s Eastern Shore. Infections are generally fatal with crabs dying from energy depletion or disruption of bodily tissues. The disease is not harmful to humans.

Dr. Hamish Small­, an assistant research scientist in the Shield’s Lab at VIMS, began his career studying Hematodinium in lobsters in his native Scotland. He says, “Hematodinium infections are now increasing in frequency and are being encountered in new hosts and locations worldwide.”

Crab growers in China reported their first case of Hematodinium in 2004; and, in 2008, other Chinese growers reported a Hematodinium outbreak in shrimp—the first time the disease has been noted in this popular aquaculture organism.

The Chinese outbreaks are of concern not only in China, but in the U.S. and other nations as well. NOAA’s most recent report on U.S. fisheries notes that more than 90% of the 4.7 billion pounds of seafood consumed in the U.S. in 2011 was imported, with shrimp the most popular item. Moreover, almost half the imports come from aquaculture, with China—the world’s largest aquaculture grower—producing 32 million metric tons of cultured seafood in 2008.

In a recent theme issue of the Journal of Invertebrate Pathology, Small, Shields, and a host of other crustacean-disease experts from across the globe raise concerns about Hematodinium’s growing threat, and its movement between wild and farmed populations. They note that the parasite likely entered the Chinese crab and shrimp farms though the filling of ponds using nearby coastal waters, and caution that it is just as likely to move in the opposite direction—with transmission from the fertile breeding grounds of crowded crab and shrimp ponds back into wild populations and fisheries.

In a review of Hematodinium’s global diversity and distribution—published as part of the same theme issue—Small writes “Hematodinium infections have the potential to significantly impact wild host crustacean populations and associated fisheries.” In another theme-issue article, Shields notes that Hematodinium may cause more than $500,000 in losses per year to blue crab fishery in Virginia.

Hematodinium most commonly infects younger crabs, with researchers reporting prevalence levels of 50 to 70% among juvenile blue crabs from Virginia’s seaside bays. “Infections are most prevalent in saltier waters,” says Shields. “You get very high prevalence of infection on the Eastern Shore, and in coastal bays along the entire East Coast of the U.S. It affects the smaller fisheries in the coastal bays.”

Shields and his colleagues suspect that the parasite also has a significant indirect impact on the larger blue-crab fishery within Chesapeake Bay, with untold losses due to the death of young crabs before they can complete their migration from coastal spawning grounds into freshwater tributaries where they might otherwise grow big enough to harvest.

“The crabs have to come through high-salinity waters as juveniles,” says Shields, “where we find a very high prevalence of the disease. We suspect that Hematodinium induces a fairly high mortality load on the juvenile crabs as they are moving into the Bay. Imagine a harvest with 50% more crabs and the effect of the parasite becomes quite clear.” 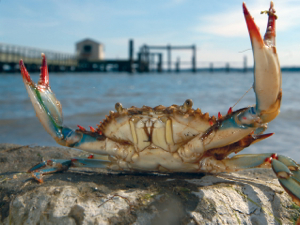 Recent laboratory experiments by Shields and graduate student Anna Coffey help explain the parasite’s inability to survive in fresher waters. Their findings, reported in the June issue of the Journal of Parasitology, show that Hematodinium can develop within the body tissues of blue crabs living in low-salinity conditions, but that the parasite’s spores are incapable of transmission in this environment.

“Most of our recommendations for the wild fishery involve changes in capture and processing methods,” says Shields. “There are low-cost preventative measures to not only stop the spread of disease but to improve the harvest from the soft-shell industry.”

Measures to prevent the spread of Hematodinium and other crustacean diseases in aquaculture include isolating ponds from nearby water bodies, stocking ponds with larvae from disease-free hatcheries or from adult crustaceans that have been certified as disease-free, educating farmers about best-management practices, and avoiding the practice of rearing several species together in a single pond, which can encourage transmission of parasites between susceptible crustaceans.

Genetics: The Next Frontier

The next frontier in Hematodinium research—under active pursuit at VIMS with collaborator Professor Kim Reece—is to improve understanding of the parasite’s genetics, so that researchers can more accurately and quickly distinguish between related species and track their interactions as they spread and mingle via ocean currents, natural movements of their hosts, and human activities such as shipping and aquaculture.

“It’s difficult to tell different species of Hematodinium apart based just on their external appearance,” says Small. “Genetic tools will allow us to more readily compare characteristics like virulence, transmission routes, and potential hosts among different isolates or species.”

“The combination of genetic tools with life-cycle studies will make for a powerful approach to understanding this group of parasites,” says Shields.