Four rising professionals recently completed a training program in oyster aquaculture at the Virginia Institute of Marine Science, providing them with the skills needed to advance in this rapidly growing industry.

The graduates of this year’s program, which ran from April to September, are Imani Black, Haley Ladeau, Lizzy Profita, and Chris Rubino.

The OAT program exposes the students to all phases of the aquaculture process, in venues ranging from VIMS’ Gloucester Point hatchery to ABC field sites and commercial facilities around Chesapeake Bay. “They see everything—they’re in the hatchery, they’re spawning oysters, they’re learning about larval husbandry, they go into the algae room and learn how to culture and feed algae, they go out into the field so they know how to work on a farm,” says VIMS Hatchery Specialist Amanda Chesler. “They see all aspects of oyster aquaculture, but on a smaller scale.” 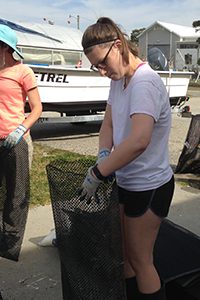 Between 25 and 30 individuals apply to the program each January, with up to 4 finalists chosen in March. According to Chesler, all members of this year’s class already had oyster experience. Ladeau, Profita, and Rubino are relative newcomers, with recent work in either a commercial or research hatchery, while Black’s connection stretches for decades past. “Imani was at Old Dominion University and has a family history of oyster work,” says Chesler. “She was able to trace family back 100 years, and they’ve been picking crabs and maintaining oyster beds, so she has the bug, if you will.”

Chesler says OAT applicants are typically looking for higher-level experience in an industry where that can be difficult to come by. It was this need that brought Ladeau to the program from Connecticut. “I had a couple years of experience,” says Ladeau,
“but it didn’t seem enough to get a permanent job, so I hoped this program would a stepping stone in my career.”

Ladeau says the skills she’s learned from ABC staff have been invaluable. “They really show you and explain to you the techniques used in all aspects of aquaculture,” she says. “Everything you learn in this program is important.” Since graduating, Ladeau has stayed on with the ABC program as a field technician while interviewing for prospective positions. 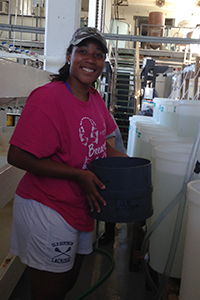 Profita first caught the aquaculture bug as an undergraduate at the University of Hawaii at Manoa studying algae, oysters, and shrimp. After completing an assignment with AmeriCorps Cape Cod in Massachusetts assisting a town shellfish constable, she applied to the OAT program in hopes of taking the next step in her career. She says a program highlight was the opportunity for externships at local commercial aquaculture operations. “The tours we went on opened up the range of possible careers after the OAT program, not just a farm or hatchery job,” says Profita.

Rubino was drawn to the OAT program after working at the University of Maryland’s Horn Point Oyster Hatchery. “VIMS’ ABC is the pinnacle of oyster genetics on the East Coast, maybe the world, and that wealth of knowledge brought me here,” he says. Rubino’s OAT experience included assisting VIMS master’s student Joey Matt in his study of oyster genetics, and sampling oysters from commercial farms on the Eastern Shore. “I learned a great deal about lab techniques and research methods in my processing of hundreds of oysters for histology and near-infrared spectroscopy,” says Rubino.

The impact of OAT

Both Allen and Chesler say they take pride in the benefits that OAT graduates offer to local industry. “We have three OAT alumni that are working for Cherrystone Aqua-Farms on the Eastern Shore, and two work at Ward Oyster Company that’s just right up the road,” says Chesler.

As hatcheries continue to grow and prosper along Chesapeake Bay’s shoreline, Allen feels the OAT program will continue to provide highly skilled candidates to address their needs. “That’s the kind of sweet spot we’re aiming at because as these companies grow, these managerial well-informed technical positions will open up,” says Allen. “We’re populating the industry with high-level technicians.”

Expanding beyond the current OAT program, Allen has worked with educators at the MathScience Innovation Center in Richmond to create a high school version called the Student Pursuing Aquaculture Training (SPAT) program. After completing a two-week aquaculture course at the Center, four students are chosen to spend a week at VIMS for hands-on training. “Two students came for one week, two came the next week, and our OATs participated in training them,” says Allen.

Allen’s focus for the short term, though, is ensuring the OAT program’s continued viability. “We’re trying to make the OAT program sustainable, and that is where our future vision is located,” he says.

"It’s just one of those programs where it’s a win-win for everybody,” adds Chesler. “We enjoy having new participants every year, and our program now relies on the extra help. We want to see it keep going.”