Professor John Graves of the Virginia Institute of Marine Science returned to port late last night with what he estimates was a 1,800-lb. blue marlin. He hooked the fish during research off the coast of Cuba, then struggled to bring it ashore during a 3-day ordeal aboard his small skiff.

But officials with the International Game Fish Association are refusing to certify the catch as a world record due to its poor condition, as it had been reduced to skin and bones via scavenging by sharks. The current world-record blue marlin is a 1,402-pound grander landed off the coast of Brazil in 1992 by recreational angler Paulo Amorim.

Graves has threatened legal action against the IGFA, citing lost endorsements based on their denial of his request for world-record certification. The International Court of Justice in the Hague has agreed to take up the case next week, citing precedent in the United Nations' Convention on the Law of the Sea 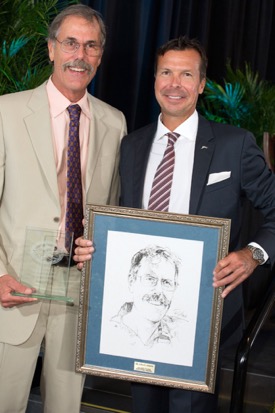 was in Cuban waters as part of project to collect tissues samples for determining the genetic structure of marlin populations using microsatellite tags. These are repetitive DNA sequences that can be used to distinguish among fish stocks. Graves also noted the additional support from the Herndon Foundation to purchase equipment to undertake genetic sample processing during the endeavor.

The project got off to a slow start. Graves and VIMS Ph.D. student Santiago Manolin spent more than a month with nothing to show for their angling efforts. Dr. Mary Fabrizio, chair of the Fisheries Department at VIMS, then encouraged Manolin to switch to an advisor who might have better luck, leaving Graves to fish alone.

“After 40 days without a fish,” says Graves, “Mary told Santiago that I was , which is the worst form of unlucky. And I think she was right. As soon as he joined Rob Latour and the Multispecies Group, they caught three good fish the first week.”

One bright spot is that Graves and his former student remain friends. “It makes me sad to see Dr. Graves come in each day with his skiff empty,” says Manolin. “I always go down to help him carry the coiled lines, gaff, and harpoon back to his shack.” Also assisting Graves are colleague Dr. Jan McDowell and the remaining shorebound members of his Fisheries Genetics Lab.

Growing increasingly worried that NOAA might rescind his funding, Graves began to travel farther and farther offshore in search of marlin. But his bad luck continued. He fished another 44 days aboard his skiff Pilar before encountering the giant that is now at the heart of an international uproar. 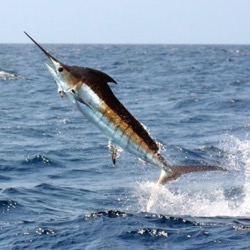 Graves began his 85th day of fishing with a plan to row out to the Gulf Stream, where schools of congregate. “I thought there might be a big one with them,” he says. He carried no lunch. He had a bottle of water and that was all he needed. For he had small tunas.

“Before it was really light I had my baits out and was drifting with the current,” says Graves. “I had one bait down in the blue water at 100 fathoms. There was no part of the hook that a great fish could feel that was not sweet smelling and good tasting.”

Graves watched the dip of the stick over the side of the skiff. He watched a bird working low over the water. "He's found fish," Graves said. Just then, he saw the stick dip sharply.

"Yes," he and shipped his oars without bumping the boat. He grasped the line between his thumb and forefinger. He was happy feeling the gentle pull and then he felt something unbelievably heavy. "What a fish," he said. The fish moved away slowly and Graves could not raise him an inch. His line was so taut that beads of water jumped from it. The boat began to move slowly northwest.

"I wish I had Santiago," Graves said aloud. "I'm being towed by a fish." Then he looked behind and saw that no land was visible. The fish never changed his course all that night as far as Graves could tell from watching the stars. “No one should be alone in their research,” he thought.

After two more days and nights alone at sea, Graves saw the slant change in the water. "He's coming up," he said. Then the surface of the ocean bulged and the fish came out. He came out unendingly and water poured from his sides. He and the circle-hook that Graves was using to ensure the survival of his planned catch-and-release were bright in the sun. The back of the fish was dark purple and the stripes on his sides were lavender. His sword was as long as a baseball bat. "He is two feet longer than the skiff," said Graves. 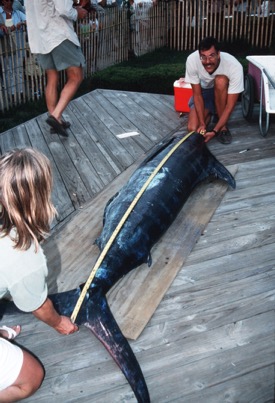 Graves has seen great fish during his 30 years at VIMS, many landed during the annual Mid-Atlantic billfish tournament. But now alone and out of sight of land, he was fast to the biggest fish that he had ever seen, and his hand was as tight as the gripped claws of an eagle.

“This skiff will never hold him,” thought Graves. “I must bring him in and lash him well and set sail for home.” Graves knew the breeze would last all night. He looked at the fish constantly to make sure it was true. It was an hour before the first shark hit him.

"Everything about him was beautiful except his jaws"

The shark was not an accident. It had picked up the scent and started swimming on the course the skiff had taken. He was a very big Mako shark built to swim as fast as the fastest fish in the sea and everything about him was beautiful except his jaws.

When Graves saw it coming he knew this was a shark that would do exactly what it wished. The shark closed fast astern and when it hit the fish Graves saw its mouth open and the clicking chop of the teeth as it drove forward in the meat. “I wish it had been a dream now,” said Graves, “and that I had never hooked the fish and was alone in my lab with a DNA sequencer.” 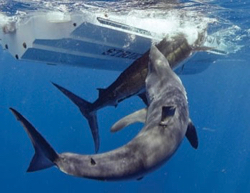 He sailed lightly now and had no thoughts nor any feelings of any kind. In the night more sharks hit the carcass as someone might pick up crumbs from a table. He paid no attention to them or anything except steering. He only noticed how lightly the skiff sailed now there was no great weight beside her.

When he finally reached port, the lights were out and he knew everyone was in bed. There was no one to help him so he pulled the boat up as far as he could. He un-stepped the mast and started to climb. It was then he knew his tiredness. He stopped and saw the great tail of the fish standing up behind the skiff's stern. He saw the white naked line of his backbone and the dark mass of the head and all the nakedness between.

This morning, on-site journalists reported that many fishermen were around the skiff looking at what was lashed beside it and that one IGFA official was in the water, measuring the skeleton. "He was 18 feet from nose to tail," he said. “But now there is not enough evidence to confirm a record weight.” 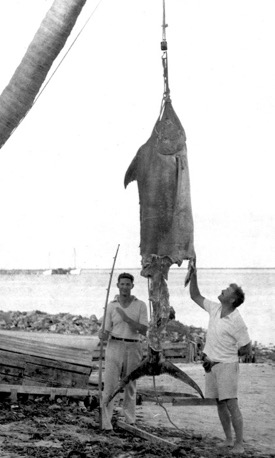 Manolin carried a hot coffee up to his former advisor’s shack and sat by him until he woke. "He beat me, Santiago," Graves said. "He truly beat me."

"No. It was . The ocean is very big and a skiff is small and hard to see," said Graves. He noticed how pleasant it was to have someone to talk to instead of speaking only to himself, an old man, and the sea. "I missed you," he said.

"Now we will conduct research together again," said Manolin.

"I'll bring the luck with me," Manolin said.

"What will your new advisor say?"

"I do not care. We will fish together now for I still have much to learn. Indeed, I wish to take your Genetics course next semester.”

A farewell to arms

In breaking news, a party of tourists recently arrived at the dock and looked down in the water. A woman saw a great long white spine with a huge tail that lifted and swung with the tide.

"What's that?" she asked a waiter and pointed to the long backbone of the great fish.

"Tiburon," the waiter said, "Shark." He was meaning to explain what had happened.

"I didn't know sharks had such handsome, beautifully formed tails." "I didn't either," her male companion said. 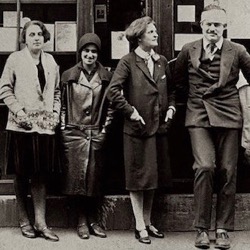 Up the road, in his shack, Graves was sleeping again. He was dreaming about his upcoming sabbatical at the Laboratoire d'Océanographie et du Climat in Paris, where he had spent much of his early career.

He knew he was beaten now finally and without remedy for any recourse from the IGFA, which requires photos, measurement, and/or weighing of a catch for consideration as a world record. He pulled the blanket over his shoulders and then over his back and legs and he slept face down with his arms out straight and the palms of his hands up.