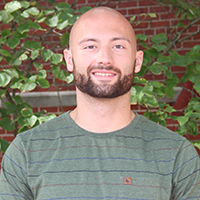 Faces of the Chesapeake was conceived by Andrew Corso, a Ph.D. candidate at William & Mary’s Virginia Institute of Marine Science.

Hash-tagged as #FacesoftheChesapeake, the thread launched on VIMS’ social media channels and website in March of 2022 through the joint efforts of Corso, fellow graduate students Miguel Montalvo and Savannah Mapes, and social media manager Laura Patrick.

Corso conceived Faces of the Chesapeake as a twist on Humans of New York, a photoblog that provides 20 million followers with daily glimpses into the lives of strangers on the streets of New York City through candid portraits and quotes.

Corso came up with the idea while fishing at the Gloucester Point Fishing Pier, a short walk from VIMS’ main campus on the York River. A conversation with a local family of anglers revealed a shared passion for the Bay and its marine life, sparking Corso’s interest in finding a way to strengthen connections among VIMS researchers and fellow Bay residents.

The goal of Faces of the Chesapeake is to showcase the diverse users of the Bay and help build connections between VIMS and the broader Chesapeake Bay community. Bay users include beachgoers, birdwatchers, boaters, coastal homeowners, oyster growers and other aquaculturists, military and commercial shipping personnel, nature photographers, and watermen, among many others.

Creation of #FacesoftheChesapeake posts has now expanded beyond the founding team to feature contributions from across the VIMS community, providing a means to share and celebrate the many interactions between our faculty, staff, and students and Bay enthusiasts.