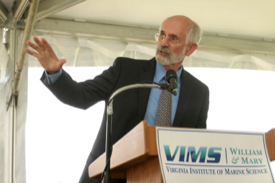 As Dean and Director, Dr. Wells has the primary responsibility to provide the vision and leadership for VIMS to be a world-renowned center of excellence in marine science, attracting the very best students and scholars in the nation, expanding the frontiers of science through research and discovery, educating the next generation of marine science leaders, and making an impact on the state, nation and world by applying new knowledge and understanding to important societal issues. VIMS has approximately 425 faculty, staff, and students and, with an annual operating budget of $52 million, is currently among the largest marine research and education centers in the United States.

Wells focused his research prior to becoming Dean and Director in 2004 in the field of coastal Marine Geology with emphasis on the sedimentology and morphology of clastic sedimentary environments and the physical processes that shape their evolution. Specific topics of research included: dynamics of fine-grained sediments; estuarine and deltaic sedimentation; and, beach and shelf processes. Field sites were located along the central North Carolina beaches, lower Neuse River and Pamlico Sound, the Mississippi and Atchafalaya deltas, along the west coast of Korea and northeastern coast of South America, and in Lake Malawi in east Africa. Manuscripts have been published in Marine Geology, Journal of Coastal Research, Nature Geoscience, Sedimentary Geology, Shore and Beach, Limnology and Oceanography, Journal of Geophysical Research, and Estuarine, Coastal and Shelf Science.

Wells served as Editor-in-Chief of Marine Geology from 2000-2015 and on the Editorial Board of the Journal of Coastal Research from 1990-2010. He previously served as a member of the Board of Directors of UNC’s Coastal Studies Institute, review panel member of the Puget Sound Nearshore Estuarine Restoration Program, chair of the Chesapeake Research Consortium, invited panelist for review of the Louisiana Universities Marine Consortium, member of former Governor McAuliffe’s Climate Change and Resiliency Update Commission, member of Site Review Teams for Sea Grant Programs in Louisiana, Florida and North Carolina, and Review Team Member of the University of Georgia’s Marine Sciences Department, and East Carolina University’s Ph.D. Program in Coastal Resources Management. He also served for three years as member and chair of the review panel for Mississippi River Diversion Planning and Implementation.

Wells obtained his B.S. in Geology from Virginia Polytechnic Institute and State University, his M.S. from Old Dominion University in Geological Oceanography, and his Ph.D. in Marine Sciences with a minor in Statistics from Louisiana State University. In 1998, he was the recipient of a Distinguished Teaching Award at UNC-Chapel Hill for post-baccalaureate instruction.

He and his wife, Patsy, reside in Williamsburg and have two children, Loretta and Gaelen, and three grandchildren.